To honor the people and organizations in Buffalo doing social media it right.

Here at Trending Buffalo, we spend an unhealthy amount of time judging others’ use of social media. We figured it was time to let the rest of Buffalo in on the fun to help us to honor the people and organizations that are doing it right.

And the winners are….

How awesome does it feel to see your sign go up? More than I thought it could… twitter.com/lake_effect_ic…

This was one of the closest #2013Trendees categories with many deserving winners.  If you want to know how to use social media to build your business, the food industry is where to look. Props to the people behind Lake Effect Artisan Ice Cream’s social media presence who clearly know what they’re doing.   Other top vote-getters included, of course, the food trucks (@WheresLloyd, @RoamingBuffalo1, @TheBMFT) as well as the Amherst Ale House and Swirls Cupcakes in East Aurora.

Coming to see us tomorrow? You’ve got plenty of options to do so! ow.ly/lkXpu

Finding a way for a retail brand to meaningfully connect with people on social media can be a challenge. I mean, who really wants to go out of their way to talk with people that are trying to sell you stuff?  A few local businesses have met that challenge and been able to leverage social media to create a significant competitive advantage.  The #2013Trendee winner is Community Beer Works. Other top vote-getters included Store716.com (a close second), Kegworks, Northtown Auto, and Artisan Kitchens and Baths.

We are open EVERY NIGHT, including tonight on Memorial Day! Attend on a weeknight when attendance is typically much lighter!#drivein

Who said the drive-in was dead? The Transit Drive-in is alive and well thanks in part to their smart use of social media connecting daily with nearly 25,000 potential customers through Facebook and Twitter. Other top vote-getters include Canalside, Helium Comedy Club, and After Dark Entertainment.

@ryanrlavoie Hi Ryan! Can you please provide us with the UPC # from the product you are referring to?

Wegmans has long been known for creating excellent in-store experiences for customers and has been able to effectively translate that experience to their social media channels.  (We know Wegmans is based in Rochester… we don’t care).  The other top vote-getter, New Era Cap.

Did you know? The Ride For Roswell uses 2,000 volunteers each year to make Ride weekend happen! Sign up now rideforroswell.com/volunteer-home

There are lots of good organizations in Buffalo with great stories to tell, but some do it better than others on social media.  Ride for Roswell comes out on top here by enabling and encouraging riders to activate their own social networks to drive donations.  Other top vote getters include Camp Good Days, The Bills Mafia, Buffalo First, and UNYTS.

#2013Trendees still to be awarded 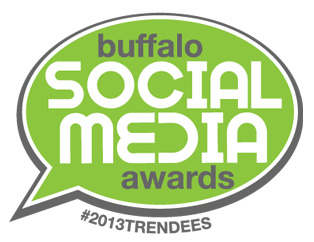