Tens of thousands of people, including many in Buffalo, have answered the call of the 26 Acts of Kindness campaign to honor the 20 children and six teachers lost in the shooting at Sandy Hook.

#26acts Of Kindness That Happened In Buffalo

The Sandy Hook Elementary School shooting shocked the world and, in the wake of such tragedy, many are looking for ways to help the community of Newtown, Conn. An online campaign called “26 Acts of Kindness” was created not only as a way to give back to Newtown, but also as a way to impact communities around the world.

It all began when NBC’s Ann Curry asked herself “What can I do?” after the mass shooting on Friday, Dec. 14. On Sunday, she took to Twitter to contemplate the answer “to help heal us all.”

Imagine if we all committed to 20 acts of kindness for each child lost in Newtown? I’m in. RT #20Acts if YOU R in. #MTP #Supersoulsunday

Tens of thousands of people answered the call and thus began the 26 Acts of Kindness campaign to honor the 20 children and six teachers lost in the shooting at Sandy Hook, according to NBC.  Of course, many Buffalonians have already joined in and below are reports of 26 “acts of kindness” than have taken place in and around Buffalo over the past few days.

@anncurry I pay for the elderly person’s groceries in front of me or behind me #20acts #26Acts #26actsofkindness — Barbara Talty (@BarbTalty) December 19, 2012

🙂 Purchased eight coffees for the mendoing construction work on the corner. They were so surprised, and so grateful! #20acts #26acts — Elmelinda Del Ponte (@Elmelinda322) December 19, 2012

@anncurry started my #26Acts today by giving to the city mission going to get them all in before the new year! — Jen Churchill (@churchij) December 19, 2012

The lady ahead of me just paid for my meal at Chipotle. Definitely passing it on. #26acts

#26Acts I’m in! Today my sister & I are collecting dresses for a special girl who wants something pretty to wear the next school dance. — Jennifer JudgeMurphy (@industrialmom) December 20, 2012

6 & 7 Put money in the salvation army kettle and sent gift cards to the mail and paper carrier. #26Acts #26ActsOfKindness

Did 6 of my 26 acts of kindness for the children and teachers that lost their lives this week #26ACTS — Erica Crane (@ErkCrane) December 20, 2012

@anncurry I started off my #26Acts by telling one of my best friends just how much they mean to me. Something I’ve never done before! 🙂

#26acts inspired me to bring in a big bag of oranges to share with my co-workers to bring them a little “sunshine”. — jholbrook (@jholbrook) December 20, 2012

Taped notes on 600 candy canes to encourage the students at Alden High School to commit random acts of kindness. #26Acts

I work at a local @dunkindonuts here in Buffalo, NY and I made all my “regulars” personalized homemade Christmas cards! #26Acts #DD — Jazmyn(@jaz_sutt) December 20, 2012

Donated to Make-A-Wish this morning. #26acts

Paid for coffee and bagel of person behind me this morning 🙂 #1 #26acts @anncurry — Kelly Cerifko (@EmmaEthansmom) December 21, 2012

#26acts bought coffee for the man behind me at the Tim Hortons drive through. Act 1, Buffalo NY thanks #AnnCurry — tara chiapelli (@TChiap) December 21, 2012

A man turned around & walked 20ft back to the store, in this crummy weather, just to open the door for me #26actsofkindness #payitforward

I love my friends so much. Thank you @christinasturm7 for always being there. And thank you for making my night 100x better. 🙂 #26acts — Emily Fox (@emilyrfox) December 22, 2012

@anncurry #26acts Sent a snowflake for the kids of Newtown when they go back to school ctpta.org/SANDY-HOOK-FUN…

I just got $5 off my purchase at Animal Outfitters because of an anonymous donor participating in #26Acts of kindness. Truly fantastic.

Just bought the guy behind us his Tim Hortons #26actsofkindness #happyholidays

A customer came in and bought Linds and I Starbucks #26ActsOfKindness #DayMade #PayItForward instagr.am/p/TjPmUYn3Qo/

@anncurryI did #26actsofkindness, I gave out 26 lottery tickets at our local grocery store

Tweet @TrendingBuffalo and let us know if you are part of an act of kindness so we can continue sharing the good word. 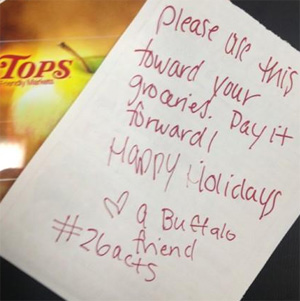