As Buffalo is the City of Good Neighbors, surely no one here would buy fake followers in an attempt to abuse our collective trust… right?

It’s an instant measure that gauges how relevant a Twitter user is.  Someone who has a couple thousand people wanting to hear what he/she has to say must be saying a lot of interesting and important things. Followers equal relevance.  And once you’re perceived as relevant, even more people will want to follow you. It’s the ultimate virtuous circle.  No wonder people are tempted to cheat the system.

As Buffalo is the City of Good Neighbors, surely no one here would buy fake followers in an attempt to abuse our collective trust…  right?

Before we profile three cheaters we’ve discovered, let’s show you what a normal Twitter follower growth chart should look like. You’ll notice a slow and steady rise from the Spring of 2010 to now for @Buffalodotcom, @Artvoice, and @BuffaloRising. 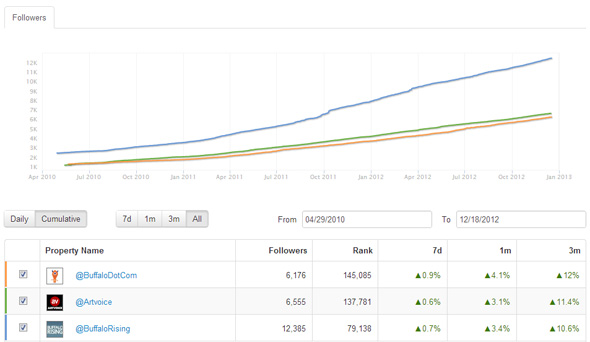 Now, let’s look at three Buffalo tweeps who have had to pay people to be their friends.

We debated about whether or not to “out” young Mike who seems to be a nice guy just trying to carve out a niche in sports blogging. But if you go to his site (Queen City Sports) you’ll notice at least two paid advertisers.  Trying to make money blogging is hard enough without people like Mike out there deceiving readers and ultimately poisoning the well of local advertisers.

Here’s the follower growth chart for @MikeStrawQCS courtesy of Wildfire.

2,500 new followers in a week. You’ll notice the rapid decline of followers after the purchase as well. This happens because Twitter recognizes some of these accounts as “spambots” and deletes them.  Mike liked the results so much he went ahead and purchased another 1000 followers in September.

OK, Mike. You’re young and you made a mistake. You assumed no one would bother to look into something as insignificant as this. We understand. We think we like you anyway.

Here’s our offer– come clean. Set an example by deleting those fake followers. Report back to us when everything’s on the up-and-up and we’ll write you in as the good guy in our next Twitter-related investigative report.

“Do with this what you will, even throw it on the site if you want: I do admit that I purchased followers at one point, however I did in no way use it to gain advertisers on my site.

Coffee culture is coowned by the coowner of my site. http://Skimypov.com is a company a friend of mine is invested in, and Paula’s donuts we reached out to and got them to sponsor by showing them visitor statistics for the site.

The twitter followers have in no way affected site traffic as we have been steady receiving the same amount of views for the past 8/9 months.

I am rectifying the problem as we speak as I don want to damage my, albeit small, reputation. I have been slowly deleting over the past month or so because I realized it was stupid. As a journalist, I want to be honest and will just make things right and do it the right way.”

A Twitter following over 30,000 is typically reserved for the thought leaders in a community. So how did someone so “Shy” get so popular? He bought his friends.

The data doesn’t go back far enough to show where his first 17,243 followers came from but you can clearly see purchases in March and August and the typical spambot deletions by Twitter.

96,356 followers is pretty damn impressive, right? But how does an injured, unknown wide receiver on an irrelevant football team get to Twitter superstar status? He buys it.

Unfortunately, Nelson’s follower data was not available on Wildfire so we first used Twittercounter to look at his follower growth over the past 6 months. 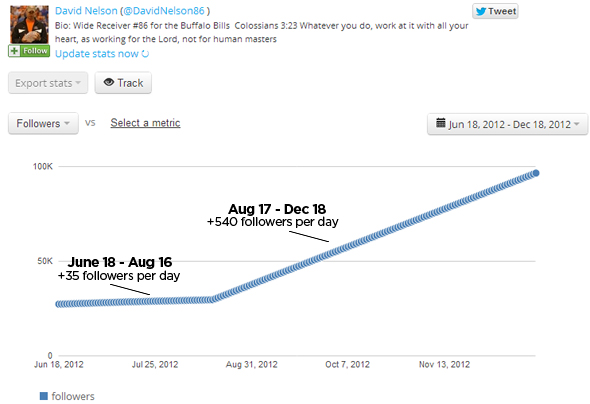 While it doesn’t resemble the sudden follower growth seen with our first two cheaters, this chart looks suspicious. The perfect consistency between the number of new followers he added each day along with the abrupt change in trajectory on August 16 smells fishy.

We went a step further and ran Nelson’s profile through Status People, which uses an algorithm to identify fake followers.

To TRIPLE check, we looked at Nelson’s latest follower and found this guy. It’s pure speculation on our part, but Saul doesn’t appear to be a Bills fan. 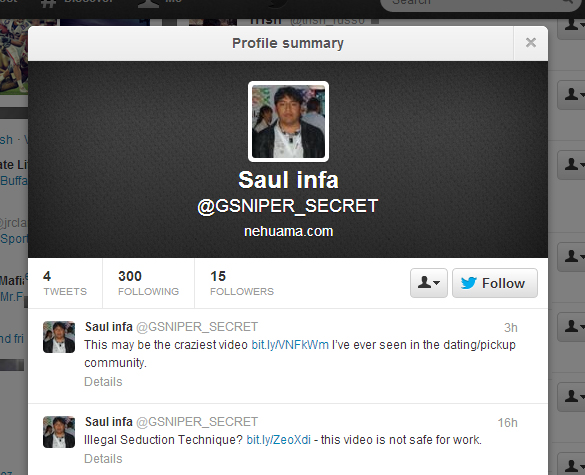 David. You look like a model, your girlfriend is a Dallas Cowboys Cheerleader, and you’re paying for internet friends? C’mon, (person who handles the Twitter account of) David Nelson. Be better than that.

Why did we do this? Simple. When we see BS, we point it out and share it. We’d like you to share it, too. (Even you Mike, Shawn, and David… some of your followers are real.)

Help us to find more Twitter cheaters. If you see something suspicious, tell somebody.