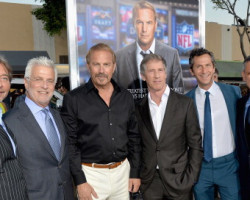 GUEST CONTRIBUTION BY SCOTT GATTIE OF SPORTSRADIO 1270 THE FAN

By “heard a little bit about it” I mean specifically heard the fact that it was originally supposed to take place in Buffalo. Cleveland is the eventual epicenter and setting for the film. Kevin Costner plays the General Manager of the Cleveland Browns on the titular day, his main goal being to win the war of analytical attrition that is draft day any cutthroat way he can.

But of course, it’s not that simple. Not only do other GMs have their motives, the Browns coach (played by Denis Leary) isn’t exactly on his side, and neither are a few of his players. Don’t think Hollywood is done, oh no. They know how to pile it on just right. Costner’s character, Sonny Weaver Jr. is his name, lost his father the week before- a father that used to coach the Browns that Sonny himself fired, and now the town hates him for it, not to mention he’s also got a little thing going on with the salary cap manager in the office (Jennifer Garner).

As the movie goes on, I eventually pretty much forgot that this was “the movie Buffalo was supposed to get”. The Bills are in it, as it would happen, as are a few other teams, such as the Chiefs, Texans, and Jaguars… but just the teams (and some past players, like when they show old footage of Joe Montana and John Elway or mention Ryan Leaf). All the names of current players, draft prospects, coaches, GMs, owners… all made up, changed to be as generic as they can be. The Bills GM’s name? Max Stone.

That’s the thing that sticks out about it negatively, really. It’s all kind of bland and interchangeable. Not only could the Bills have been the centerpiece team in this film- THEY COULD HAVE BEEN ANY TEAM IN THIS FILM. Here’s some names for you. Ray Jennings. Tom Michaels. Bo Callahan. Chris Crawford. Can you tell which ones are players, coaches, GMs or agents in this movie? Of course not. I get that you have to have fake names, you obviously can’t have the real GMs because they’re pretty busy with the real draft day, and there’s lots of legalities with the players, be it college athletes or dealing with the NFLPA. But at least, if you have fake names, add some spice and creativity into it! Want a hot-tempered coach that stands up to his GM to run his team the way he wants? Combine a few names of old coaches that did it! Add it to the essence of the character! Bill Ditkamowski, I don’t know. It’s better than whatever Denis Leary’s character’s name is, because I’m writing this two hours after seeing it and I don’t remember what the character’s name is. (Edit: I looked it up afterward on IMdB, and it’s just “Coach Penn”. He’s a central character and they didn’t even bother to give him a first and last name).

The actors, as a whole, do a pretty good job, though perhaps Arian Foster ought to keep his day job (he’s got a pretty good thing going for him). The story gets pretty gripping and throws in a nice twist or two, as every good draft ought to. The editing, cinematography and all those other bells and whistles are nice and clean enough that you won’t get distracted by them too much, and all the NFL presentation and pageantry, with cameos by Roger Goodell and a few analysts is all done really well. All in all the biggest issue I had was not much personality to each place. They characterized Cleveland pretty nicely, showcased a decent amount, but all in all it could have been anywhere. Even Buffalo.