If someone ran over a skunk with their car, brought it to your house and forced you to eat the entire thing, you wouldn’t want any part of it. You… 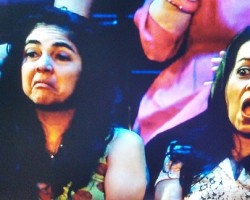 Women Tell All While America Cheers 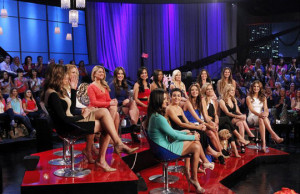 If someone ran over a skunk with their car, brought it to your house and forced you to eat the entire thing, you wouldn’t want any part of it. You especially would not want to eat the brain or the eyeballs. I mean, the whole thing would be terrible, but the brain and the eyeballs would be the worst part. It would suck even more if a live studio audience raucously cheered while you were eating the skunk.

Juan Pablo has two girlfriends left. They’re in St. Lucia, waiting to get engaged. Look! That will all have to wait. The women have to tell all. It’s important. DON’T YOU WANT TO HEAR ALL???!!!

ABC brought back all of your favorite girls from the season. I don’t have any favorites but, I wasn’t asked. The girls will tell all so we’ll hear all. I’m settled in for all.

Before something of value can happen, Harrison brings out Sean and Catherine to talk about how they got married and had sex. They’re not on stage for four seconds before the phrase ‘Grown Sexy’ is uttered twice. This is the perfect garnish for my ‘Hate’ meal. The newlyweds talk about their wedding. This is exactly what I wanted when I prepared to hear all.

Harrison brings up their sex-having. Sean says there were fireworks. Catherine says, “Quick fireworks!” and everyone laughs and I laugh and America laughs because Sean didn’t display sexual endurance and it’s hilarious. We quickly move from that to a story about Sean getting bitten by a sting ray on his privates. Keep up!

I manage to repress my urge to throw up during that interview, but then, ABC plays a fake Harrison/ Muppets interview. THIS SHOW HAS NO RULES. It’s a commercial for the Muppets. Just when you thought ‘The Bachelor’ couldn’t get any lower, they rent an auger and dig to the lower mantle of the Earth. Go see the Muppets, you guys. Juan Pablo wants you to see it. 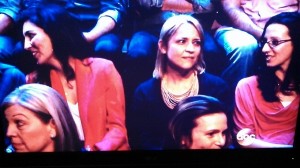 Next, they introduce the women from the season so 249 ladies and one guy in the studio audience can scream. If there’s one redeeming value of the ‘Women Tell All’ episode, it’s watching these cat owners nod approval at everything Chris Harrison says. I don’t recognize most of the women. The dog woman brought her dog. I think Clare’s dad is here.

Harrison roles out some video footage of a shirtless Juan Pablo so the studio audience can ruin their chairs. I get 3 seconds of women in eye black in the video montage so, essokay.  I complain less. During this footage, ABC puts a little window in the corner so we can see reactions of the contestants while they embarrass themselves on the big screen. It’s Grown Sexy.

Next comes the Juan Pablo hating. The girls discuss how Juan Pablo looks good but isn’t a good guy. They say he’s selfish and boring. While Andi talks about how selfish Juan Pablo is, girls from the studio audience nod approval. These same two women will cheer wildly when Juan Pablo walks on stage to take his hot seat. They’re powerless to his charms. Most of the contestants no longer like Juan Pablo. He didn’t talk about them enough. Renee is the only girl who stands up for him.

After that, we talk about kissing. Keep up! The girls complain about Juan Pablo using his daughter Camila as an excuse to not kiss some of the women. This happened repeatedly throughout the season. Dog woman says, “He didn’t talk about Camila when he was in the ocean!” Oh super snap! Juan got Powned. 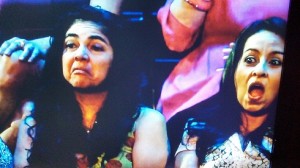 Some people can’t handle when ‘all’ is being told

Chris Harrison gets all serious and warns the girls about accusing a man of using his daughter as kiss-prevention excuse. It’s serious. C’mon, you guys. Get serious for a minute. An open discussion about the sincerity of a man dating 27 women at once follows. It’s about the most ridiculous thing I’ve ever seen.

Next, we talk about Clare having sex with Juan Pablo in the ocean in Vietnam and then yelling at Clare about. There’s mutual agreement over Juan Pablo’s jerkedness. He’s a jerk, you guys.

Sharleen dumped Juan Pablo. I always give extra points to contestants who dump the game show prize. She gets the first visit to the hot seat. The seat is super hot because tough questions were asked. They show Sharleen footage, complete with Sharleen’s pained reactions in a little window in the corner of the screen. It’s painful. Sharleen cries because she’s in pain. Harrison throws a hot one down the pipe to begin Sharleen’s hot seat session. He asks her, “What was that like?”

Harrison and Sharleen agree that she didn’t have a cerebral connection with Juan Pablo. She’s super smart. She tells America how she thinks at night and I’m all, “Screw that! Who thinks?”

After being treated to footage we’ve already seen, Renee gets the next visit to the seat that is hot. Her seat is much hotter because she has a child and there is extra heat produced from two people.

Renee regrets not getting the chance to tell Juan Pablo that she loves him. She doesn’t regret abandoning her baseball playing son to be on the show because she learned a lot about herself. I learned a lot too. Renee is really telling all, you guys.

Chris Harrison asks Renee if she’s dating. Tabloids have leaked the news that Renee is currently engaged to a non-Venezuelan. She tells America that, “I’m in a situation where I’m really happy.” She doesn’t admit to being engaged. She doesn’t tell all. I THOUGHT THEY WERE SUPPOSED TO TELL ALL! Don’t name your show ‘The Women Tell All’ and then have them not tell all, ABC! You stupid pieces of garbage, how am I supposed to know all if they aren’t going to tell it.

Andi gets the next visit to the hot seat. With Andi, the seat is scorching. She stormed off of the show because her experience with Juan Pablo in the Fantasy Suite was a nightmare. I’d say that we’re going to hear all about it but, no one has to tell all anymore. Who even cares?

Andi was falling in love with Juan Pablo but things changed when the cameras went off. Juan Pablo only talked about himself. Juan Pablo told Andi that she barely made it to the semifinals of the game show and that made her mad. That would make anyone mad.

She tells America that she faked falling asleep to get the night over with and that Juan Pablo, while not being mean to her, was insensitive and mean. Andi is totally telling all. What the hell was Renee’s problem? Andi is still looking for someone. It sounds like someone wants to be the next Bachelorette. Andi wouldn’t be a good Bachelorette. I don’t hate her enough. It would be difficult for Andi to keep my hate streak alive. I’m sure she’d try.

Juan Pablo gets the next visit to the hot seat. The same studio audience members who mocked and nodded disapproval at Juan Pablo just minutes ago scream for him like he just won an NCAA championship. 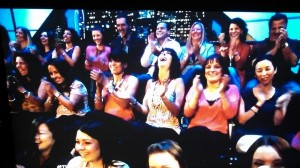 It’s so much fun when women tell all.

Juan Pablo doesn’t wear a tie but, essokay. He seems nervous to see all of the women he dumped. Juan Pablo tells America that he doesn’t have any regrets over how he treated the women. One of the women I don’t recognize calls him out for using his daughter as an excuse for not cleaning out her fillings with his tongue. Juan Pablo says “I’m not here to kiss 27 women.” That was my yearbook quote. It’s a good point. He wasn’t there to kiss 27 women. He was there to find a wife and mother for his daughter Camila and breeding partner for his future son and daughter. It’s not about kissing 27 women, you guys. Keep up!

There’s a lot of talking about honesty and fair treatment on a show about a guy who dates 27 women. Essokay. Andi calls out Juan Pablo for not looking for a wife because he couldn’t remember where some of the girls went to school. The audience claps. Juab Pablo defends himself. The audience claps.

Dog woman brings up an interview where Juan Pablo said that there shouldn’t be a gay Bachelor because gays wouldn’t set a good example because of their capacity for hot lustiness. Juan Pablo apologizes and says it was taken out of context. The girls yell at him for using his broken English as an excuse for gay bashing. There’s yelling.

Before things get ugly, Chris Harrison slams his hammer down and gives Juan Pablo time to explain himself. Juan Pablo says that he has gay friends and loves gay people. There, you guys. We’re all clear now. Essokay.

To lighten the mood, Harrison rolls out the hilarious blooper reel from the season. It’s hilariously bloopery. There are so many bloopers. I can’t even take it. They even show a dog going potty, you guys.

I didn’t need all of these words to recap this episode. Here is what happened tonight. A bunch of women went on a show to date one man. It didn’t work out of them so they complain about it. I should have led with that.

Next week, the show mercifully ends. Juan Pablo chooses a future 3-month relationship with either Nikki or Clare. And, we’ll finally get to see Clare’s ‘Dead Dad’ DVD, god willing. If I don’t get to see her ‘Dead Dad’ DVD, I’m going to throw a chair through my window. If I do get to see it, essokay.

Greg Bauch tells all every week. If you missed ‘all’, you can read it all here.