Dez Hartsock (she’s Dez now) is looking for love. ABC is trying to serve love up. Dez is the poor girl next door with a Cinderella story. All of this… 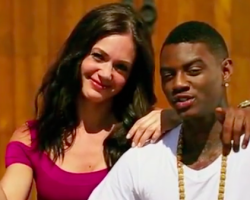 Bachelorette Recap- Love is Like a Soulja Boy Video

Dez Hartsock (she’s Dez now) is looking for love. ABC is trying to serve love up. Dez is the poor girl next door with a Cinderella story. All of this year’s contestants have two arms. I think the following three quotes really set the tone for tonight’s episode.

“It’s nice having Soulja Boy here to guide everything.”

“I never, in a million years, imagined that I’d be doing a rap video with Soulja Boy.

How could you not get caught up in this recap?

Fifteen contestants remain in this, the most dangerous of games. Chris Harrison gathers his crew together at the mansion to lay down the rules: 1. Do not rape Dez. 2. Have a devastating story. 3. Have abs.
The guys look their best in their logo-less tees. They’re excited about the prospect of finding love. I have to admit, I’m excited too. I love love. I’m rooting for everyone to be safe and have fun. After Harrison announces the rules, the guys all clap. They clap like first base coaches (sports quota filled).

There will be a pair of 1-on-1 dates and one terrifying group date that makes me question Democracy and the freedom of speech. What is seen on tonight’s episode cannot be unseen.

Brooks gets the first date. The guys all congratulate Brooks and pat him on the back for taking their taking out their girlfriend. They’re so happy for Brooks.

Brooks is excited about his time with Dez. He says, “She’s this ball of mystery to me”. Any girl would like to be called a ball of something. Dez is excited too. She says that, “I couldn’t be more excited”. So, to clarify, if John Lennon and George Harrison came back to life, and told Dez that she had just won the lottery, and then the Beatles performed a live concert on the roof of the Bachelor mansion, Dez’s excitement meter wouldn’t budge.

Brooks puts on a super goofy green tuxedo and its super goofy. I can’t even stand it. I cover my eyes because, holy cow, the goofiness.

They go out for ice cream in their wedding clothes (so goofy!) and the crowd recognizes Dez. Some woman flips out and starts screaming and hugging Dez. This woman couldn’t be more excited.

Dez and Brooks make out on the Hollywood sign because, why not. They slurp all over one of the ‘L’s.

On the way home, they get lost (not really) and the neighborhood is bad because there’s graffiti. It’s clearly a poor neighborhood because a bunch of kids are sleeping in their living rooms. Brooks is sure they’re going to die, but Dez isn’t nervous because she knows that producers have set up a candlelight dinner in the middle of a bridge.

It’s a bridge date. It’s romantic. I can’t believe you’re still reading this. Brooks tries to talk about his parents’ divorce and the music goes from soft, romantic piano to ultra-soft ‘Brooks came from a broken home’ piano. It’s dramatic. Brooks’ Dad wasn’t around. He probably regretted naming his son ‘Brooks’. This show is dramatic. Brooks cries about his Dad and this guy is pushing hard for his own Bachelor season. America is falling in love with that bastard Brooks.

When dinner is over, the happy couple wanders further down the bridge to take in a private concert from Adult Contemporary star Andy Grammar. There’s a carpet in the middle of the bridge. Producers brought out a throw rug for their Andy Grammar concert. They think of everything. Andy Grammar is professional and doesn’t falter in singing despite some horrendous ‘White People’ dancing and some ‘bridge’ slurpin’.  The date is a huge success, I guess.

The group date is next. Dez lines up her 13 boyfriends to give them a speech about how serious she is about finding love. Then, she announces they’ll all be in a rap video with Soulja Boy.

White guys line up to freestyle. They all start their freestyle rap by saying, “My name is…” because that’s how white guys rap. Soulja Boy does a good job of not slapping anyone.

The rap being performed is called ‘Right Reasons’. It’s a parody of former Bachelor contestants. They make fun of Casey Mumbles, Mesnik, and Rated ‘R’. I’m hoping you have no idea what that last sentence means.

Soulja Boy takes a bunch of the white guys to show them some dance moves. Even this season’s black guy can’t dance. There’s a ton of dancing. There’s rapping. I don’t really have a lot to say about the rap video part. I hated it. I hated it so much I now have a bump on my neck.

The group date cocktail party is next. Shirtless guy questions whether or not some of the other guys are ready to settle down and be serious. He came onto a Reality TV show, to share a woman with 24 other guys, and he wasn’t wearing a shirt. Shirtless guy is a hypocrite.

Shirtless guy gives Dez a used diary. It has an inscription from a Dad to a daughter in the back, but the pages of the diary are blank. Apparently, the daughter wasn’t a big fan of her gift from Dad because she discarded it without ever recording a single memory. I argue with my wife over whether or not giving a girl a used diary on a first date is creepy. I don’t win a lot of arguments so, it felt good to be on the right side of one so lopsided.

The guys sit on couches and drink and talk about Dez. Some guy named Brandon says, “Love is like a butterfly. You hold it too loose, it flies away. You hold it too tight, it’s gonna die. So, I’m not going to be the guy to squish whatever I could have some day with her.” You can make fun of this show all you want but, you do learn a lot about love… and butterflies.

Ben has become the villain this season. He’s the guy who exploited his cute son to gain attention. He horns in on other guys’ conversations so they run off to huddle and talk about Ben. They don’t think Ben is here for the right reasons. I don’t either, you guys.

The plumber guy, Mikey, pulls Ben aside to give him a what-for. Mikey doesn’t appreciate Ben stealing time with his girlfriend. He doesn’t think Ben is genuine… I think. I don’t really understand Mikey because he doesn’t use his words. They laugh with each other and compliment shoes. This is a terrible episode of the Bachelorette. Mikey is a grown man, yet still calls himself ‘Mikey’. Even my computer underlines his name in red, as if to say, “Dude! He’s a grown man. No way he still goes by ‘Mikey’!”

Ben and Dez cuddle on a couch. They talk about his son. Then, Ben asks Dez if she would mind being kissed. It’s not awkward at all. None of this is. They’re on camera. The awkward part comes when we see Brandon sitting quietly in the bushes, watching them kiss. Brandon starts crying. He cries because the girl he’s known for 15 minutes kisses one of her 14 other boyfriends. Hey Brandon, you’re holding the butterfly too tight!

Brandon pulls Dez aside to tell his sad ‘I don’t have a Dad’ story. The ‘Brandon didn’t have a Dad’ music kicks in. Brandon puts his foot on the gas to tell a ‘My Mom did drugs’ story. A couple of the soft piano breaks from the pressure of Brandon’s dramatic story. It’s dramatic, guys. Brandon really likes Dez and tells her. He says, “I didn’t think I’d fall in like with her this quick”. I hate this show.

Dez tells the camera that Brandon would be a great husband. Then, she gives a rose to Ben because his son is cute. Dez doesn’t even realize that Ben isn’t even here for the right reasons. I realize it, guys.

At the end of the night, the group sits on a couch and raps out loud. I fish my keys out of my pocket so I can cut my arm.

The last 1-on-1 date goes to Bryden, despite his name. They hop in her aqua blue Bentley for a California road trip. Dez talks a little about how hard she had it growing up because her brother slept in the living room.

They go to the beach, then they pick oranges, then they eat cheese. Bryden says, “This is too much fun” and I totally agree. It’s too much fun. I can’t take it. Just as I’m about to explode, ABC goes to commercial. I totally dig toothy Jan from the Toyota commercials.

Back from the break and Dez and Bryden eat dinner outside in the dark. Please try to keep up. Bryden tells a story about getting into a car accident and the soft piano returns. He almost died… but, to the best of my knowledge, his Dad was around, so it’s not totally dramatic. Dez likes Bryden’s near-death story and tells the camera that she is falling in like with him. Bryden is an Iraq War veteran. He gets a rose. America rules!

Then, they change into bathing suits and jump into a hot tub. There’s some awkward talk. Bryden talks about what an awesome time they’re having, three times. Dez tells him to shut up and make out with her. He does. They rub abs and make out. It’s a hot, slurpy good time. America rules!

The cocktail party is next. Thank you so much for reading down this far. Michael pulls Dez aside to tell her the dramatic truth about his type 1 diabetes. At this point, the soft piano guy is getting hazard pay. This is more soft, dramatic piano than I’ve ever heard on the Bachelorette. It’s record breaking.

Right in the middle of Michael’s dramatic diabetes story, Ben swoops in and steals Dez. The rest of the guys hate on Ben and soft piano guy gets a break. Dramatic, serious violin guy revs up the ‘We hate Ben’ music. The guys sit on couches to hate Ben. I’m hating Ben from my couch at home, so I feel like I’m a part of the group.

Mikey and the rest of the guys yell at Ben. It’s heavy. Ben defends himself. They go in circles. It’s all pretty stupid. It’s like listening to drunk guys in a bar argue over who is a bigger Bills fan.

Meanwhile, SUNY Geneseo reads Dez another poem, or something. Some lawyer guy talks.

At the rose ceremony, Dez thanks her boyfriends for making her feel comfortable. Then, she dumps a couple of them. The black guy goes home. SUNY Geneseo goes home. He needs to work on his poems. He should focus on ‘butterfly’ analogies. It worked for Brandon. He got a rose.

We made it through an entire episode and Hashtag guy didn’t say ‘Hashtag’. I’m #disappointed. It’s like he’s not even #trying. How do you expect to be #Hashtag guy if you’re not going to constantly say ‘Hashtag’ #fail #bachelorette #stabme.

Next week, an ambulance arrives at the mansion because, it’s the Bachelorette. There always needs to be an ambulance. I wouldn’t watch the show if there wasn’t the constant promise of someone getting hurt. They need an ambulance on stand-by because, love is like a butterfly. If you hold it too tight

Greg Bauch wrote most of this with his eyes closed because they were caked shut with blood from watching all of the white people dance. He is the author of ‘Frank Dates’.