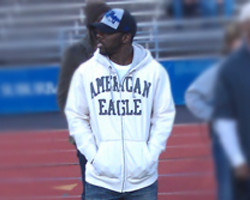 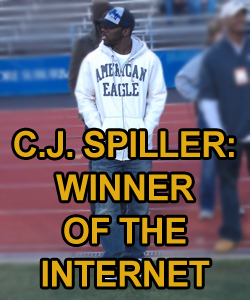 It’s true, it totally happened. You were probably too busy looking for Amanda Bynes in the beer tent at Greek Fest. That was, of course, an absurd venture. The logical place to look for a Nickelodeon star-turned whacked-out wig enthusiast was at the Pride Parade. You, too would be searching for pride if you went from Easy A to bong bombardier in three short years.

Amanda, please. Get some help.

Anyway, Spiller won the week. His methods were a bit unorthodox, I’ll admit, but he seized the half-fortnight by eating lunch with Jonah Javad. The best running back on the Bills talked to the WGRZ sports anchor in a segment called JavAudibles, sponsored by Toyota, which sells vehicles named after both a tree and Keanu Reeves.

The video begins with the camera focused on a half-eaten footlong hot dog covered in some sort of cheese-flavored topping. The camera pans up to Spiller—sipping from a bottle of Aquafina—as he confirms that he indeed had cable television growing up.

“I’m a SpongeBob guy, you know?” Spiller said as middle school me nodded while eating alone in the school cafeteria. “Patrick. Squidward. Mr. Krabs. You know, he’s all about his money.”

Like Gudda Gudda said in that Lil Wayne song, “I’m all about my Bills like crustaceans.” Spiller then went on to discuss the entrepreneurial spirit, record corporate earnings in an economic downturn and how Obamacare has impacted the Bikini Bottom fast food industry. Just kidding, he goes into #RISEANDGRIND press conference speak about the best fry cook under the sea.

“SpongeBob’s a hard-working guy. He’s the team player,” Spiller said of the frycook. “SpongeBob would be considered the team player. I just thought of that.” The light bulb is on, a new connection illuminated. Everything is interconnected in this crazy world we live in. Hustle Synapses fire as Spiller pivots back to Mr. Krabs.

“Mr. Krabs… he’s a stealer,” Spiller said. “He likes to steal people’s stuff.” This claim is actually incredibly well-documented. Mr. Krabs is an old, unethical talking crab. He also has a whale for a daughter. The owner of the Krusty Krab lives a life of crime and improbable sexual activity. The Krabby Patty formula is far from his only secret.

Javad—off camera for most of the segment—declares that he always identified with Squidward, SpongeBob’s dour, clarinet-playing neighbor. Spiller says the two look like twins and moves on to a more pressing question.

“I never understood how Patrick sleeps up under the rock,” Spiller said. “How does that not suffocate him?”

This is a great question about the true nature of an anthropomorphized sea star. As the author of exactly one book about sea stars, I can tell you that sleeping under a rock is no problem for these creatures. In fact, they use water as blood and push their stomachs outside of their bodies to eat stuff. They must have Patrick do that stuff off-camera or something. Does Spiller know, I wonder, who voiced Patrick Star? It’s Bill Fagerbakke, who played Dauber in Coach. Cartoons! Football! EVERYTHING IS CONNECTED!

Spiller’s new head coach also admitted the running back isn’t a dainty waif in need of a fainting couch after consecutive running plays. The fact that Doug Marrone doesn’t think of No. 28 as a malnourished, corset-crushed Victorian maiden makes us all winners this week, really.