Weddings make everything better, unless you have to watch them. It’s exactly what I needed after watching the Bills grab their ankles while playing a ‘home’ game in a different country. 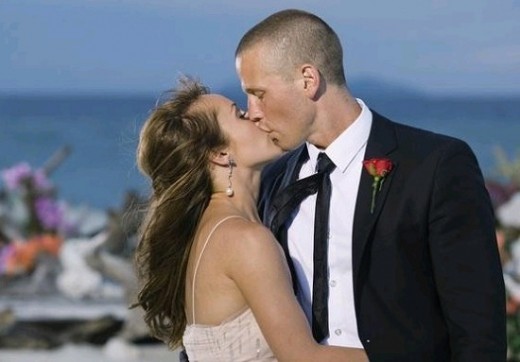 Weddings make everything better, unless you have to watch them.  Former Bachelorette contestant Ashley H. and her forehead have married their Game Show consolation prize J.P. and ABC thought everyone would want to see them try on shoes and cuddle and throw around enough money to feed everyone for the rest of time. It’s exactly what I needed after watching the Bills grab their ankles while playing a ‘home’ game in a different country. (Sports quota filled)

If you’re new to my recaps, here’s a quick primer. The Bachelor/Bachelorette is terrible and my favorite thing to do is watch it and recap it. My soul is made of black tar and this is the only way I can feed it. Trending Buffalo picked up my recaps because they’d like to go under for the tax write-off.

Ashley H. is beyond annoying. Every time she talks, I get a kidney stone. She is desperate and needs to be fed compliments like ‘Gauntlet’ needed to be fed quarters. Not a lot of girls will get my ‘Gauntlet’ reference but, if you did, we should have a televised wedding together.

“And, most important, what will their dog ‘Boo’ wear?”- Chris Harrison, with an actual quote while running down the fun we’re about to have.

For the record, the definition of ‘important’ is ‘of great significance or consequence’, so our priorities are in order.

During this two hour special, ABC runs down the details leading up to the extravagant wedding ceremony of their favorite couple. Chris Harrison starts off by listing the success stories of their Game Show. This is the third wedding out of 25 franchise seasons. One of those wedding involved a guy who picked a girl and then changed his mind and picked another girl. They’ve got about a 12% success rate which, to be fair, is better than I would have predicted. Numbers are also skewed because a guy named Brad Womack, who always seemed like he was about to punch someone, was the ‘Bachelor’ twice.

The benefit of going on a date Game Show to meet your future spouse is obvious. J.P. says it best, “One day, our kids are going to ask, how did you and Mommy meet? And I’ll say, have a seat.”

And, if you didn’t see Ashley and J.P.’s Bachelorette season or have not seen any episode of any Bachelorette season, you should know that their kids will be watching Mom make out with 7 or so dudes in a hot tub in one night, cry constantly over her own desperate insecurities, and sleep with 3 dudes the night before dumping one of them at a Rose Ceremony.

That’s how Mommy and me met!

We get a little taste of the home life of Ashley H. and J.P. because ABC cameras camp out in their bedroom and wait for them to wake up so America can watch them cuddle with their dog Boo. These cameras follow them out into the street for stirring footage of ice cream sharing and walking.

Ashley gushes about how ‘meant-to-be’ she and J.P. are. It should be noted that Ashley fell in love with 7 guys during her season. One of those guys was a paid actor named Bentley who was brought on the show to act mean. Ashley found out he was being mean and still begged him to stay on the show. He left. She cried. He came back. She cried and asked him to stay. He left again. She eventually chose J.P. It was like a Disney movie.

Ashley H. and J.P. talk with their families so Ashley’s sister gets a chance to be on T.V. again. She has tattoos. It’s controversial. They all talk and cry because that’s what weddings are about. Boo barks.

In the middle of the chaos, Ashley H. and J.P. find time to lay a picnic blanket out in a park and drink wine. Do these people carry around blankets and wine everywhere they go? Are the Wine and Blanket stores in their city as plentiful as Tim Hortons in Buffalo? Are you guys even answering these questions?

The wedding planner has dog dresses for their dog Boo. Finally, the important questions are being answered. The planner holds a dress up next to the dog and announces that it costs $8,400. I look over and see that my wife is sleeping and I hit fast-forward. I’m sorry, the anger that wells up inside of me over a dog dress that costs more than I make in months could power a factory. Fast-forwarding was a nice substitute for punching drywall.

I’m going to kick this into high gear because this presentation is terrible.

They try on dresses and tuxedos. Chris Harrison interviews horrible people from seasons past. Some of them are pregnant.

They show the entire nuptial ceremony. Chris Harrison is suddenly a priest because he’s performing the ceremony. It’s endless. I just went to church in my living room. It’s like a 2-hour diamond commercial.

That will be the moment your man will know he has found true love.

ABC follows up hell with the promise of more hell. They preview the upcoming ‘Bachelor’ season with religious guy Shawn. He has shoulder muscles like Idaho has potatoes. There will be love, drama, repelling from cliffs and, of course, an ambulance at the Bachelor mansion because that has to happen every season. It’s contracted. California must have built a hospital next to the Bachelor mansion by now because the place is constantly crawling with ambulances.

I hope you’ll join me in January to follow the fun. I sincerely apologize for my recaps.