Smart Thing 1: Panera Bread comes to Elmwood Remember that exhausting Bass Pro debate? Folks who had suffered from the pestering affliction of “Bass Pro Fatigue” lost their reason to…

Remember that exhausting Bass Pro debate? Folks who had suffered from the pestering affliction of “Bass Pro Fatigue” lost their reason to rally when that national chain dumped its Buffalo plans in 2010. Activists, take heart, and dust off your placard supplies: Panera Bread is coming to Elmwood.

“A chain? Near Spot and Globe? On Elmwood?” you ask? Indeed, Panera is moving right in on The Sacrosanct /sometimes infested with drunken Buff State students Strip, and they’re not asking any of us for permission. Well, I’m with you people. Let’s take on these elitists.

You may remember all the problems that came with the Bass Pro proposal. From the above link:

“Critics denounced the use of tens of millions in public subsidies to reel it in; demanded a living wage and other agreements in exchange for a transfer of city land; released a report that cast doubt on Bass Pro’s ability to generate economic development and boost tax rolls; and filed a lawsuit claiming the project violated the state constitution.”

Maybe it’s no surprise that a Twitter rage storm erupted over the news that Panera will be taking over the old Blockbuster on Elmwood. Activists have plenty to chirp about:  a national chain is replacing, well, a national chain, quality bagels might finally be available in this town, and it’s not even a Walgreens.

Ok activists, forget everything I typed at the beginning of this. We might want to keep our placards in the garage after all. Seriously, we can’t consider competition to be a deleterious thing. Yes, Spot and Globe are nearby, but they will be fine. Hell, if the addition of one Panera is enough to sink their ships, then maybe it’s time to reassess the quality of their product. (And there’s plenty of Buff State students for everyone.)

If there’s one thing that Tim Horton’s has taught us, it’s that you can never have enough good times coffee cafes. And there’s a lot of Tim Horton’s.

It’s hard enough to get our kids to stop bullying each other at the playground and online – especially when, as adults, we’re being bullies ourselves. Such was the case when the “Niagara Falls Reporter” published it’s (most recent) rant against gays… in hockey.

I’d hate to forward them any more traffic, so I won’t link you to their site. That being said, any of those concerned should visit NFR’s homepage and make a list of their sponsors. Give each of them a call, or an email. Kick NFR right where it hurts the most: in the coin purse.

The response by the Buffalo blogosphere was outstanding, and immediate. Alex of Black and Blue and Gold provided a rhetorical and a personal response, and included some useful contact info. Ryan of The Roost took a little more time to do some serious digging on these NFR chumps and absolutely buried them. Nice shovel work, Ryan!

The buzz created by these posters along with the chatter on social networks was enough to catch the eye of Deadspin, which brought international attention to the hate agenda of NFR. My own communications informed me that the Human Rights Campaign (which is 138,945 followers-strong on Twitter) and the NOH8 Campaign (393,715 followers) also took note. In comparison, NFR has a laughable circulation of 22,500. We’ll see how many sponsors NFR has left at the end of the week.

Newsflash: Local TV news is THE WORST!  11 minutes of radar, 6 minutes of thuggery, 4 minutes of waterskiing ferrets and 2 minutes of sports cliché.  But we have to give some “smart-props” to WGRZ Channel 2 for attempting to change it up a bit. 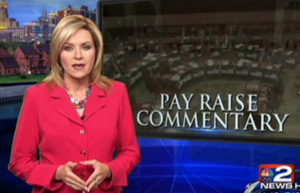 First, WGRZ added an occasional new segment by Maryalice Demler, wittingly called “Maryalice’s 2 Cents.” We’ll forgive WGRZ for that waaaay overused title, (I mean c’mon, it’s even been used by Kent Brockman) because her reporting in these segments has been terrific. You can watch her rip on New York State lawmakers after they proposed pay raises for themselves here. Outstanding.

Local TV news has a long way to go to gain relevance with younger audiences, but these are certainly steps in the right direction by Channel 2.

Note: “3 Smartest Things” is being produced to go along with the “5 Dumbest Things in Buffalo” series here on TB. “Why three,” you ask? Well – far be it from me to break our time honored tradition of berating each other on the progress of our fair Queen City. Tell you what, when the new Peace Bridge goes up, we’ll go up to five. And of course, feel free to follow me on Twitter to discuss all things trending in Buffalo.

Note to Larry Korab (of the 5 Dumbest Things series): Fair enough, I may “only have three smart things to talk about each week,”but I think that’s all I need to steal your web traffic. The gloves, my friend, are off! Then again, I’m a peaceful kinda guy. Perhaps this calls for a Beer Summit.