These days there are many podcasts to choose from and with the increasingly easy ways for amateur broadcasters to get their shows out to the world wide web the number increases daily…. 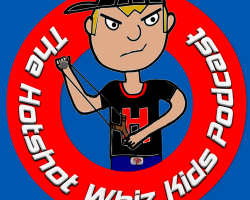 These days there are many podcasts to choose from and with the increasingly easy ways for amateur broadcasters to get their shows out to the world wide web the number increases daily. While podcasting has been a big deal for a while in the podcasting hotbeds of LA and the Northwest United States, there are now more and more people picking up a microphone and starting their own shows all across the country. Many of these shows lose their steam pretty quickly with long breaks between episodes or the hosts quitting entirely after they figure out that putting out a quality show on a regular basis is a lot harder than it looks. With the amount of shows out there it is easy for good shows to slip under the radar. One of these shows is the locally produced Hotshot Whiz Kids Podcast, which involves long time friends and Buffalonians Mark Davila and Mike Cline Jr. who have known each other for going on two decades and within that time have worked countless jobs together, lived together and even dabbled in Stand-Up comedy together.

Back in July of 2010 the guys decided if they were going to have conversations they might as well record them and let the world listen in on all the things they had to say. Strong opinions, a sharp wit and an almost unrivaled chemistry sets these two jokers apart from the other six billion similar podcasts that are out there. Unlike a great number of podcasters the guys have not missed many days in their entire five year run. With over 1000 podcasts to their credit and a growing audience not only in their hometown of Buffalo, but all over the world, with some of their biggest fans listening in from Australia and England. Back in 2012 they expanded the show to a five day a week schedule and there have been uninterrupted daily episodes ever since. The show, which the guys describe as a half hour long hug, mixes improv, opinions and witty banter in a unedited live to air format that is heavily influenced by Howard Stern and Adam Carolla, but with an uniquely original point of view.

To celebrate their 5th anniversary the guys are once again participating in the Buffalo Infringement Festival with two free shows at Milkie’s On Elmwood (formally the Elmwood Lounge) on July 23rd and 27th. It will be a show featuring stand-up, improv, musical numbers and some of the guy’s favorite bits from the show.