Smart Thing 1: Van Miller Was A Legendary Voice For Legendary Times We do not have a Super Bowl in this town, but boy, have we ever witnessed some incredible… 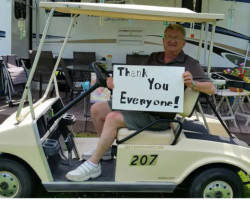 We do not have a Super Bowl in this town, but boy, have we ever witnessed some incredible moments while trying to get one. Along the way, we’ve come to learn that greatness isn’t defined by one game. We especially realized that during and after the historical Super Bowl run of the 90’s. Greatness is achieved in the moments that propel teams to the top, and keep them there, never quitting. Always fighting.

Oh, we had our fair share of greatness, and Van Miller was the perfect voice for it. He was stirring, passionate, and triumphant. He was the classic “homer” play by play voice that kept fans glued to their radios (be those radios in cars, living rooms, or in the stadium itself, with that guy who brought a radio along to enjoy Van’s calls).

@MattyRenn Was never far from some dude at RWS who had Van on a little radio back in the day. “Hey man can you turn that up?” Always.

Of course, that guy always served as the go-to for any questionable calls on the field. “Hey, what are they saying on the radio – was that a penalty? What’s Van saying? Was that a touchdown?” So we don’t have a Super Bowl. But we have had greatness along with us, and were very, very lucky to have the perfect voice to match all of those perfect moments:

Thanks for the memories, Van.

All things considered, the number 15 isn’t exactly iconic in the hockey world. It has has a mainly sporadic history of being worn, and has never really found greatness like the 9s, 8s, 19s, and of course, 11s in hockey sweater history.

Count me as one of those who is glad that Jack Eichel chose #15 to wear, and as one who is glad that he did not take one of those tired old iconic retreads. In fact, I would not have minded one bit if he stuck with 41, the number he wore throughout training camp. It grew on me pretty fast, and 15 will do the same.

As Eichel will do his part to redefine the franchise, he’ll do the same for the number 15.

Who ever cared about that number, really, before it became his? It is now one of the hottest pairs of digits at the NHL store, and if things go as planned, will stay hot for years, maybe even decades to come.

Not to get ahead of myself here, but it is nice to imagine that someday my grandkids maybe fighting over who gets to wear 15 for street hockey. This, of course, is just grand summertime day dreamin’.

Besides, those kids might be fighting over two numbers. Or three. Can we make it four?

I cannot promise how any of this is going to shake out, but watching these young players grow and define those numbers and the Buffalo Sabres franchise as we know it could be the thrill of a lifetime.

Thirteen thousand, to be precise.

At work & I notice a guy wearing the shirt @26shirts dedicated to my pops. A complete stranger to me and my family. So awesome! #OneBuffalo

…so here is another one. Keep up the good work, Del and Co.

I love it when a Smart Thing comes together. What a fantastic father-son-city-veterans story. Sticktaps all around.

To everyone who helped. This is for you from my father #OneBuffalo #ThankYou pic.twitter.com/qI7KCjQzKJ

Bring it on world. This is our show.

Bring it. Whatever team offer sheets Eichel, Pegula will buy that team and fold it. https://t.co/v0g7RsT8Wk

Speaking of shows, The Rolling Stones just brought down the Ralph. What a way to start up the summer.

Note: Questions? Comments? Have a Smart Thing? You can find Scott Michalak reliving Van Miller’s calls of The Comeback Game on Twitter at @ScottyMCSS.