Yeah, playa! 5. Our Media Following the Aurora, Colorado Shooting Are movie theaters still safe? Should we ban people in costumes? How can we speculate on how and why this…

Are movie theaters still safe? Should we ban people in costumes? How can we speculate on how and why this happened with as little facts as possible? How can we scare people following this horrific act? What do our celebrities think?

Movie theaters don’t scare me, people with assault weapons do.

The reason that no one trusts the media anymore is because they are bad at their jobs.

4. Home Fries Instead of Hash Browns at Every Diner

Hash browns are superior in every way don’t even try to tell me different you communist. 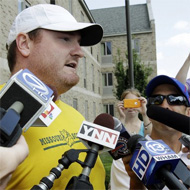 I am so excited that it almost the time of year when they play the games that don’t matter. Oh look! Half the people here won’t be on the team in a week. SUPER glad the team can spend all of this time game planning for how they can most effectively watch their wide receivers drop passes. None of us know a thing that’s happening, so let’s all fire up hypothetical scenarios on how the season will progress!

I’m looking forward to this season, but the best part of training camp is its conclusion.

2. Erecting Statues of The French Connection

A few things. We retired their numbers so this base is kinda covered. Also – GAH! I’m blinded from all of the championship rings! Their success is mind blowing!

Maybe it’s not the best idea to start building statues as other well known sports institutions are tearing them down, too.

1. Threatening To Slap Nik Wallenda If He Doesn’t Pay Up

So the guy who said halfway through setting up a major stunt that was garnering worldwide press that he didn’t have the money to do it and needed donations to get across the Falls stiffed you on the check? STUNNING. Tight rope walkers are usually floating in hot tubs filled with petty cash so the man is definitely holding out.

You know why the Canadian side wrote off the loss? Because they actually ARE rolling in money. You know why the USA side isn’t? Because instead of banking on one of the wonders of the world to make money, we hitched our wagon to Dow Chemicals. Yes, we have a clear history of making sound business decisions. We kinda deserve to get stiffed.

It’s technically Niagara Falls, but if you get upset about that while reading a column such as this we may have to add a sixth item to this list.