There are a lot of dumb things in Buffalo and these are five of them from the past week.

In what feels like Buffalo’s very own version of Mad Men, a few employees from the public relations firm Travers Collins & Co decided to break off from the agency to create their own business about a year ago.

A lawsuit, a countersuit, and a whole bunch of “he-said-she-said” later, the venerable PR Agency’s name keeps popping up in news circles alongside phrases like “bitter lawsuit” “artificially depressed” “breaching agreement” and “unethical behavior”.

4. How You Dress At The Taste Of Buffalo 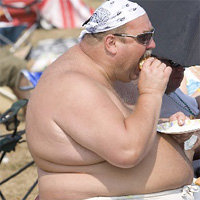 I get that we are all going downtown to eat hot meals at the hottest time of the year at perhaps the hottest time in our recent history, so perhaps this is more of a scheduling thing than a personal appearance thing. However, yee gods. We have somehow managed to make sweat both a verb and a statement of style over the years. We better clean it up this year people and that is no lie.

Also you look dumb in Crocs step your game up. Wear a nice polo or button down. Skip the Big Johnson duds. Save that junk for the Allentown festival.

3. Some Weak Guests At The Taste Of Buffalo At All

Applebees – You read that right. This is what we want the world to think of our dining… flair.
Danny’s – Who on this Earth hasn’t had the chicken wing soup already?
Jack Astor’s – No.
Louie’s – There will be at least one place to go after you’re intoxicated.
Tops Friendly Markets – We might as well just invite Family Dollar.

On what day of the week am I going to be unable to get to the Shannon Pub? Seriously I have to pay double the rate for an Anderson’s cone? I can just go to the Anderson’s that will still be open and not sweat my privates off. I can get anywhere in this town in twenty minutes. I can get into any restaurant on any night of the week for considerably less.

Give me something new. Adding the Lloyd’s is a step in the right direction, but there should be a term limit here. If you’ve been in town ten years already, we get it. Use this as a way of getting people in this town to experience things they don’t normally experience.

It would be just like us to have an entrenched, teat-sucking land owner put up a personal grudge list on a dilapidated building that he owns yet doesn’t develop in a economically struggling part of town.

Also, Jim Heaney is still kinda writing and producing things that people see. Does he get his check removed? Huge dis on new media by the former GOP candidate for governor.

1. The Buffalo School Board Screwing Up The Hire Of The New Superintendent

Aaaaaaaaand we make that creep look like a stand up citizen by having our city school board bungle the hiring of our new superintendent. Because the school board might have violated open meeting laws, Paladino is suing to stop her hire. The Buffalo News reports that the board is technically within their rights, but Mary Pasciak points out that the board might be making decisions behind closed doors as opposed to just talking about them.

All of this leads us to a point where one of the worst school districts in the nation starts a new leg of a marathon by falling off a bridge into a pool of piranhas.

Correction: In a previous update, Trending Buffalo reported that Larry Korab was responsible for unleashing the trapped spirits in the Ark of the Covenant. In fact, Larry Korab is the pseudonym for The Defenseman, who writes for the Dear God, Why Us? blog. You may follow him on Twitter by searching @TheDefenseman.  Trending Buffalo regrets the error.