Those 2-inch legs churn up dirt like a maiden making butter. 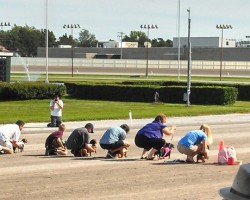 An injured wolf, abandoned by its pack, is forced to scavenge for food near a group of human hunters. During a night’s camp, a human throws that wolf a scrap. It’s the birth of the domesticated dog. Eventually, those wolves evolved into wiener dogs, I think. I’m not sure. I’m not a botanist.

I do know that wiener dogs are the height of dog-comedy development. To extract the highest amount of comedy from your dachshund, you must race it.

Wiener Dog Races are the greatest thing ever. They’re the first wonder of the world. Batavia Downs has been holding Wiener Dog Races since 2005. This was the first year I attended. It’s like waking up from a coma and finding out that you’ve wasted 8 years of your life.

In an era where sports can be hard to stomach, Wiener Dog Races are a pleasant respite. Baseball is littered with PEDs. Wiener dog racing is substance free, aside from a slight Gaines Burger addiction problem.

Hundreds of children and one 36-year old man lined the track at Batavia Downs to take in the excitement on Sunday. There was some confusion at first. The races were delayed because they couldn’t find Snickers. The track announcer told the crowd that “Snickers has been scratched.” I crumbled up my program because I had rested all of my hope on Snickers. The crowd suddenly cheered as a man scrambled to the gate with a black dachshund in his arms. Snickers had been found.

The excitement before the starting bell is electric. Chops are licked. Some of the dogs tussle in the starting gate. Frank N Beans stares Itchy down. It’s an intimidation tactic. None of these dogs wanted to face him. Most of them were not entirely sure that they were racing.

Chaos ensues at the count of three. Like Jim Marshall, one of the dogs began its dash for the finish line in the wrong direction. It happens fast. Those 2-inch legs churn up dirt like a maiden making butter. The dogs sprint like there’s a little Chuck Wagon pacing them.

There were 8 races, with the fastest of the 10 dogs moving on to the Championship trot. Everyone’s money was on Gordon, a repeat champion, and ‘Flash’ Gordon delivered. Gordon is the first 3-time champion of the Wiener Dog Races.

Gordon is a champion’s champion, the kind of athlete that only comes around every couple of years (or 14 dog years). It’s a dogasty.

Here is the Championship race, so you can tell your grandchildren you witnessed Gordon. I’ll be there to witness the 4-legged 4-peat in 2014.

Watching these competitive beasts race was the perfect ending to an exceptional day at Batavia Downs. Shout out to Cyst to Sister, the beautiful mare in the 4th Pace that gave Ella V Horse all she could handle.