Embed from Getty Images Well, this is certainly one of the greatest post-game quotes of all time. “I tried to lay on him a few times,” said one Broncos rusher… 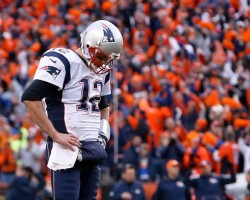 Well, this is certainly one of the greatest post-game quotes of all time.

“I tried to lay on him a few times,” said one Broncos rusher after the game. “I tried to rub my nuts on his face.”

The only thing preventing a huge nationwide increase in Broncos jersey sales is that, so far, the quote remains anonymous.

Of course, Jerry Thornton of WEEI Radio in Boston brilliantly uses the quote as proof of Brady’s greatness.

Never mind the indignity, how do you expect any quarterback to get the job done when he’s starting at a guy’s yam bag? Just from a practical standpoint. How is Brady supposed to go through his pre-snap reads when he’s getting teabagged on every dropback? How’s he capable of going through his progressions and anticipate where his receivers are going to break off their routes when he’s half a second away from wearing a pair of Arabian goggles? Not only does it make it impossible to quarterback, it’s dangerous. You could get pinkeye like that.

This is all the proof you Haterade drinkers should need that this loss is all on the offensive line and not Brady. The fact he played as well as he did after staring into another man’s grundle proves he’s the greatest of all time.