Using traditional television ratings, the movie was a disaster. 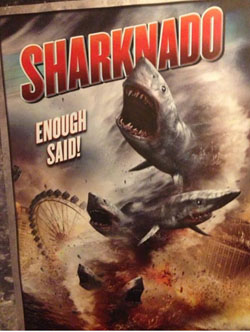 A tornado full of sharks won the Internet last week, proving how little that distinction actually means in the process.

Your feelings about Sharknado prove to be a litmus test for how you see the world around you. Using traditional television ratings, the movie was a disaster. Using tweets per minute, that whirling dervish of teeth and impossibility was a star.

I haven’t seen the flick just yet, but as someone endorsed in social media on LinkedIn, I think I have the proper authority to talk about it in a critical manner. Sharknado was an in-crowd communal gathering, and the rest of the internet quickly took notice. Whether they were there just to make fun of the special effects or to scavenge jokes off the corpse of Tara Reid, everyone you know was talking about Sharknado by Friday morning.

Or at least it felt that way. If your Thursday night was spent away from the television, you had a full-blown case of FOMO by Friday afternoon. That’s what happens when it feels like everyone in the world is talking about the same thing. It’s what happens when your brain is lying to you.

As unimaginably vast as the Internet is, we’re all overbidding on the actual retail value of the digital space we take up. The footprint of your online community is small when compared to the rest of the world. Even when your Twitter timeline is freaking out about a tornado full of sharks, or Tumblr can’t fathom the abortion restrictions Texas passed last week, the apparent groundswell of discourse can often mean little in reality. The Internet can be more than the sum of its server farms, but usually it’s just a great place to yell into the echo chamber and embrace confirmation bias from the comfort of an office chair.

This may sound incredibly cynical, but I think we’ve gotten really good at simply communicating about a cause rather than for its benefit. It’s much easier to express outrage at the Florida court system than it is to consider the social and legal differences of that phallic state and it’s citizens. And I know a ‘RIP Finn the Human‘ joke will definitely get more retweets than a true examination of our individual impact on celebrity.

The Internet has gotten together to make the world suck less countless times, but our savior is not a SyFy original movie. It’s just the humbling little flop that shows us how much the tweets can really matter. If you’re in it for the laughs, you’re doing it right. To expect anything significant to change requires a bit more than 140 characters and your best intentions.