Plenty of Nutty Bars for everyone. 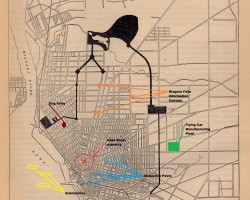 Anyways, with a constant barrage of zombie movies and zombie shows, Hollywood has us ready for a Zombie Apocalypse, kind of. We’d be ready if zombies existed. They don’t. There is no such thing as zombies. There never will be. The dead stay dead.

Aliens, however, will kill us all (source: television). Aliens are up in space right now listening in on our cell phone calls and learning our weaknesses. They’re also probably enjoying their flying cars which, for some reason, our scientists can’t seem to invent yet because they’re too busy concentrating their efforts on stupid stuff and I have to drive on pavement in one lane because we also can’t make pavement that lasts more than 3 months and HOW CAN YOU CLOSE A THRUWAY RAMP? Should I just walk everywhere, science?

The aliens are coming, eventually. While you’re looking down at your phone, I’m busy coming up with a plan to protect Buffalo from the Aliens. We need to practice our guerrilla insurgency tactics if we stand a chance against a technologically superior species.

1. Move the enemy to the middle

If you’ve ever stood on Abbott rd. on a clear day and look north to the downtown area, you can see that Buffalo is a Valley. This elevation difference can be a huge advantage for rifles and, if alien technology renders gunpowder useless, bows and arrows. We need to push the enemy downtown.

Get on your phones and talk about how important the Skyway is. They’re listening. You could be all, “That Skyway is the key to everything on Earth. I hope the aliens don’t blow it up. We need it”. The Aliens will blast the Skyway to dust. We just got rid of the Skyway with zero cost to Mr. and Mrs. John Q. Taxpayer.

The first thing the Aliens are going to do is attack our food supply. War is hell. We must all learn to eat bugs. I’ve been eating bugs. Think about it, if we all start eating bugs now, the Aliens will destroy all of the bugs thinking that they’re destroying our food supply. We just had our bugs exterminated for free and there are still plenty of Nutty Bars for everyone.

3. Give the Aliens sexually transmitted diseases

If the parts match up, it’s your duty to your species to contract Chlamydia now and wait for an Alien invasion. And, would it kill you to put on some makeup and maybe try something new with your hair? Do you even care about America?

The Aliens will have the distinct advantage of being able to communicate telepathically. They’ll be able to read our minds. The internet has taught us that kitten videos are a tremendous time-sucking rabbit hole. Take some time to memorize kitten videos. You can broadcast these kitten videos to the Aliens and stall their invasion. Maybe learn the theme to ‘Family Ties’ to drive the Aliens crazy. Don’t think of Elyse Keaton, though. They’ll want that.

If you think about Elyse Keaton, the Aliens win.

We can also gross them out. I spend six hours a day thinking about making out with old women and eating my own poo. When the Aliens corner me and try to read my mind to get our plans, all they’ll come up with is the image of me rounding third on an elderly woman. When they turn to throw up, I’ll give them Chlamydia.

And, I know what you’re thinking, “Greg! If the aliens can read our minds, won’t they know that we’re trying to trick them?” The answer is ‘No’. We’re not trying to trick them. They’re our friends. I love the aliens, and they should totally trust me and look the other way if I am holding a shovel because I would never bash them in their alien heads. Right, guys?

The good thing about this plan is that it works for a Russian invasion as well; especially hot Russian ‘lady’ soldiers. I’m kind of hopeful that an army of mind-reading Russian babes comes rappelling down from helicopters to learn the ‘Family Ties’ theme and contract my Chlamydia. Maybe we could even instigate the attack.

I haven’t given this plan a ton of thought. Perhaps we can meet once a month or something and go over logistics. We’ll need some nerds, some tough guys, breeders, board games, beer, and some double ‘A’ batteries.

And, for the love of God, if the Aliens start landing their star cruisers in our neighborhoods, don’t be an idiot and run back into your house. Where are you going? Are you going to sit in your basement and wait for them to pull you out by your ankles while you futilely swing a tennis racket?

If you run back into your house, you’re dead. Get in your car and drive to the woods. We should all get pick-up trucks and leave them, fully fueled, by our back doors with a clear path to a dirt road that leads to the woods. That worked in ‘Red Dawn’ (the first one).

We can all hide in the woods until the Aliens have made their first pass and then we’ll meet up at the Harbor. We can get the Little Rock running. I’ve taken the tour and it has a kitchen.

If I’m wrong and there is a Zombie Apocalypse, I’ll buy everyone who reads this a cold beer, as long as we all agree that the coldest a beer can be and still be in liquid form is 33 degrees, and anyone who assumes a beer can be colder than that is an idiot.

Good luck to all of us.