Look at all of the people seated, not falling out of the upper deck! 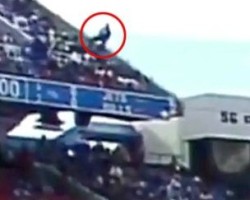 Does Ralph Wilson Stadium Get A Bum Rap? 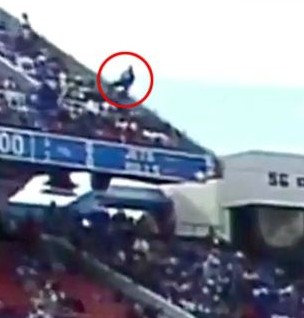 Look at all of the people seated, not falling out of the upper deck!

One guy falls from the third deck of Ralph Wilson Stadium and everyone makes a huge deal out of it.

It’s almost as if some of you have never consumed so much alcohol that you thought it was a good idea to slide rail a slippery metal surface 50-stories from the ground. No one talks about the 70,000 other people who didn’t fall out of the third deck.

Sure, it was news worthy. But I’m not sure if we need to change the whole system. People fall 30 feet onto other people constantly. It’s just not always captured by a national television broadcast camera. We also don’t have any evidence that this man was drunk. It was an awesome game and adrenaline is powerful.

I’ve been to plenty of games in Orchard Park. I was once at a Bills/ Raiders game in the 1999 and two people had sex with each other three rows in front of me. I’m a pretty open-minded guy but, I have to admit, it grossed me out a little. These were not soap opera actors with abs. These were weathered Raider fans and there wasn’t a tantalizing music track to smooth the process. It was just raw, extreme passion.

It’s appalling, until you consider the math. Ralph Wilson Stadium holds over 70,000 people. These were the only two people in the entire stadium having public sex, to my knowledge. The percentages are staggering. That’s almost no people having sex. I give that Bills/ Raiders game crowd credit for self control. We show tremendous restraint as a community. We’re almost prudes. If you go to a party, there’s a good chance that 2 to 3% of the people present are off somewhere gaining carnal knowledge of each other.

Sure, some alcohol is consumed in Ralph Wilson Stadium but it’s not like people are so panicked that they haven’t had enough beer that they’ll shotgun three cans while waiting in line to be frisked.

We get seven weeks of fun in Buffalo. The rest of the year, we don’t get to stand between two cars holding out a blanket to block passers-by from watching our girlfriends urinate. If it wasn’t for Bills games, when could we throw batteries at people for wearing different colored shirts?

Full disclosure, I’ve never actually been punched in the teeth or peed on during a Bills game. I feel like the experience gets a bum rap. You don’t want to bring an 8 year old there in December and that sucks but, you also don’t have to constantly look skyward at the third deck expecting people to fall on top of you. It practically never happens. The exact same number of black bears have walked through my yard in Wheatfield in the last five years as drunk fans have fallen from the third deck of Ralph Wilson Stadium.

The worst time I ever spent at the Ralph was in 1995. I was still in a quasi-Seahawks  phase and I went to a Bills/ Seattle game wearing a Rick Mirer jersey. When the Seahawks scored their first touchdown, I stood up and gave a little, “Woo!”

In case you’re really drunk right now and you think it’s a good idea to go to a Bills game and be the only one in your end zone section wearing a Rick Mirer jersey and give out a ‘Woo’, it is not. It is a bad idea. It is the most bad of bad ideas. People who purchase extended warranties for electronics have better ideas than people who wear Rick Mirer jerseys and woo.

I can’t complain though. I was in enemy territory, and the Ralph faithful defend their own. I love having them on my side now. It might be full of the drunkest, rudest, sex-havingest people on Earth, but it’s our stadium. (It is. It’s seriously our stadium. We paid for it and we pay for the repairs to it and we still have to pay to pay for seats or they black out the games.)

I hope this falling incident doesn’t distract us from the real issue in the NFL and that is the Marquise Goodwin catch in the Kansas City game that NFL officials ruled was not a catch.