Be Heath Ledger; awesome, then dead. 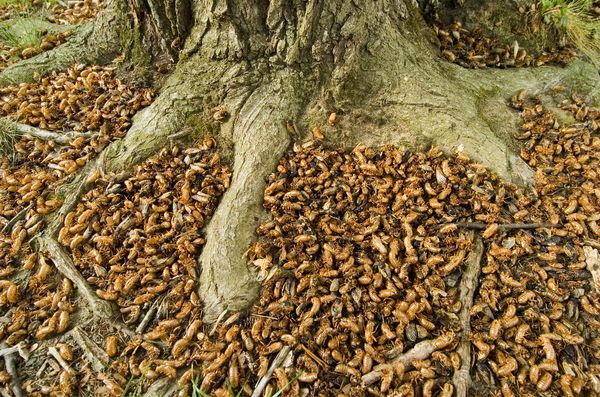 Sex, Bugs, and Rock and Roll 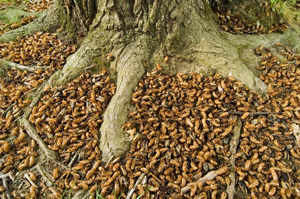 If I emerged after being underground for 17 years, the first thing I’d do is pee. Then, I’d check to see who left birthday messages on my Facebook page. Then, I’d have enough sex to procreate my species into the billions.

By now, you’ve heard of the Brood II Cicadas ready to surface from the Earth and swarm the East Coast of America. Cicadas are bugs. They sleep for 17 years, wake up, have sex, lay eggs and die. For 6 weeks or so, billions of Cicadas cover the map from Louisiana to Maine. Scientists estimate that a billion bugs is a lot of bugs. Cicadas have already been spotted acting like they don’t want to hang out at places in Allentown.

I wish I was a Cicada.

First of all, when a male Cicada wants to hook up for bug-loving with a hot Chic-ada, he doesn’t need to go on FarmersOnly.com. He just needs to sing. I can sing. I can’t dance. If I need to dance to attract women, they either need to be incredibly drunk or blind and dead. (By the way, I’m going to need a lot of money from the government for coining ‘Chic-ada’)

Secondly, Cicadas sleep for 17 years.  Sleeping is the best thing ever. If I sleep for 10 hours, I’m fuzzy with good feeling. Multiply that by whatever you need to multiply it by to get to 17 years. Cicadas also don’t need to do math.

And, for those of you thinking that you’d get bored and stiff from sleeping for 17 years, I’m sure they don’t only sleep the whole time. You’d get to couch and Netflix a couple seasons of ‘The Wire’ over the 17 years.

Thirdly, they’re bugs and get to fly up girls’ shirts and stuff. Sure, you die in two months but, once you’ve peed and flown up a girl’s shirt, what else is there? You don’t want to be like Patrick Ewing and hang around too long, playing in slow motion for Orlando on swollen knees. Be Heath Ledger; awesome, then dead.

In summation, the Cicadas are coming. Don’t be nervous. Let them have sex on your shirt. They don’t bite. Also, their molted skin is edible, if you’re super hard up and stuck in traffic or something.

1- The Bills were in the playoffs and Jim Kelly was still their quarterback.
2- The only thing a computer was good for was ‘Oregon Trail’.
3- Pluto was still a planet.
4- The #1 song in the U.S. sucked.
5- The Hornets were in New Orleans and the Bobcats… wait, the Jazz, they’re in Utah and the Bobcats are in Charlotte. The Bobcats didn’t exist. New Orleans also has a team and it’s not the Jazz. It’s the Hornets. I think it was the Bobcats and now, it’s the Hornets. I’ll bet the New Orleans tourism industry has been crippled by fear of the hornets and bobcats that plague the region.
6- In 1996, I could do a jumping-jack without being in pain for 4 days.
7- A blog exactly like this one appeared in the New Yorker.

Greg Bauch is a Stand-Up Comic (obviously) and the author of ‘Frank Dates’.