Are we enjoying our Sabres vacation yet or what? Whew! Glad THAT’S over. Smart Thing One: Keep the Dyngus Day buzz strong with UB’s digital guide to Buffalo’s Polonia We’re… 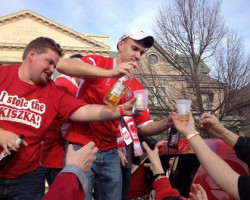 Are we enjoying our Sabres vacation yet or what? Whew! Glad THAT’S over.

We’re pretty big on our history in this town, and the East Side just got a pretty heavy dose of Polish heritage during the Dyngus Day celebrations yesterday:

HUGE crowd for the Buffalo #DyngusDay Parade. Possibly the biggest ever. Great turnout of the community to celebrate our Polish Pride.

.@wgrz the Kiel-Bus-A is tossing sausages ( not a typo) to kids at #Buffalo #DyngusDay parade pic.twitter.com/OtUoCn3rP5

.@wgrz reason #57 why #Buffalo #DyngusDay parade is like no other: Float provides free shots of vodka 2 crowd pic.twitter.com/dIQa9ihzgH

Good times were had.

If Polish heritage is your thing, make sure you head on over to the UB Library’s digital collection of Buffalo Polonia in 1906.

“The Album pamiatkowe i przewodnik handlowy : osady polskiej w miescie Buffalo, z dolaczeniem okolicznych miejscowósci ze stanu New York is an important historical and genealogical resource for Buffalo and Western New York. The title, which translates to: ‘Souvenir album and commercial guide of the Polish settlements in the City of Buffalo, and neighboring villages in the State of New York.’, was first published in Buffalo in 1906 and is now available online.”

The entire book has been digitized and is located in the UB Institutional Repository. Images of the book have been individually scanned and placed in a digital collection for improved access. Images of buildings and landmarks have been incorporated to the mapping website, Historypin, to help recreate the East Side of Buffalo at the turn of the 20th century.

“Over the next few months, we plan to have all of the almost 400 images from the Album pamiatkowe available online for those interested in the history and culture of Buffalo, New York.”

BarCamp Buffalo is an “ad-hoc gathering born from the desire for people to share and learn in an open environment. BarCamp Buffalo is an intense event with discussions, demos, and interaction from attendees. No spectators, only participants. All attendees should give a demo, a session, or help with one. Anyone with something to contribute or with the desire to learn is welcome and invited to join.”

Click here for a list of last year’s attendees (which included a presentation from former Smart Thing winner Chris Smith and his Cash Mobs efforts). Meanwhile, BarCamp Buffalo has done good work to broaden its scope and reach:

“If you attended a prior BarCamp Buffalo, we lacked space and had altered the format — expect the real deal now that we have lots of space (30-min presentations, multiple presentations in different rooms at every moment to give you greater choices).”

If you’ve got an idea that can be a thing (future Smart Thing, perhaps), make sure to sign up at BCB’s website. You can also follow the event on Twitter at @BarCampBuffalo, or by using the hashtag #BarCampBUF.

And oh yea, Lloyd will be there.

“Representatives from the Erie Canal Harbor Development Corp. and Global Spectrum will be holding an informational meeting…Adding food vendors is one of the top priorities for the upcoming season by both the ECHDC and Global Spectrum…

…A beer garden near Clinton’s Dish is also planned.”

We talk, write, argue, yell, and generally argle-bargle a lot of sometimes heated words at each other about what we do right and what we do wrong here in the Queen City.

For once, let’s just agree to sit back and be happy for where we live. No arguments, no discussions.