I heard 3 different languages (4 if you count Canadian) on the Ice at Canalside and at HARBORCENTER this weekend. It’s the middle of January, and things are really happening… 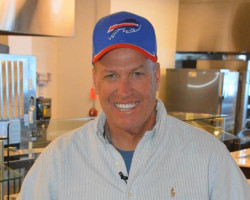 I heard 3 different languages (4 if you count Canadian) on the Ice at Canalside and at HARBORCENTER this weekend. It’s the middle of January, and things are really happening downtown. In Buffalo. It’s bizarre. It’s fantastic – especially when you consider what the area looked like about five years ago.

Let’s build us a football stadium.

This #OneBuffalo stuff is going to be great.

Speaking of #OneBuffalo, who’s up for some Bills football in January next season? The distinguished staff at Buffalo wins is pretty enthusiastic. And oh, so is this guy:

The Sabres are losing during a rebuild. Some people think that’s a pretty good thing. Some don’t. There have been some pretty spicy takes lately shared between the “tankers” and the “not tankers,” but the rebuild is not about just this one season. There is so much more going on that shouldn’t be forgotten. In fact, it should be celebrated. From Chris Ostrander, at Two in the Box:

“… it would seem that far too many individuals who follow the Sabres have ignored the arsenal that Tim Murray has at his disposal. While getting McDavid or Eichel remains up in the air, there is little doubt that the 2015 Draft will represent the point in which Murray puts the pedal to the floor on this rebuild.

Murray’s efforts at last year’s deadline and even the efforts of his predecessor, has provided the Sabres with a plethora of future and current assets for which to manipulate their roster with. In fact, you could form an entire roster based off the prospects Buffalo has in the AHL, major junior, Europe and the NCAA. You would actually need to make cuts because of the depth of the prospect pool.”

“…While players like Mikhail Grigorenko and Joel Armia have made tremendous strides in Rochester this season, they’ll still need to make another adjustment if they’re in Buffalo next season. The same can be said of Justin Bailey, Baptiste, Fasching (should be be signed) and even Brendan Lemieux although he isn’t AHL eligible. Simply shouldering the expectation for a turnaround in 2015-16 on the shoulders of first and second year pros is foolish and massively shortsighted.

What is far less shortsighted is moving forward with the understanding that Murray has the ability to leverage the mountain of assets the team controls to bring about more immediate change for both the long and short term.”

So, Chris, for the tankers, or the not-tankers, what does a mountain of assets really mean?

“…What I can say definitively is that Murray will be dealing from a position of power at the deadline, draft and beyond and it’s foolish to overlook the foundation that has been set for the Sabres’ future.”

Excellent. Thanks, Chris.   Hit the link above to read the read of his post (I highly recommend that you do, so I’ll link to it again here).   Meanwhile, you can find Chris on Twitter at @2Itb_Buffalo.

Yes. It’s time for a truce, so I’m calling for one. This is #OneBuffalo, for cryin’ out loud. Knock it off with the snowballs to the faces already.

As we all wait to see if this dreadful scourge ends (it won’t), check out some of the other curious facts that Movoto turned up about our life here in Buffalo.

Do we have too many rinks? Nope. Build more.

Hockey fans were dealt a blow when Capgeek recently went out of service. Are you wringing your hands over how to deal Drew Stafford? Concerned if Cody Hodgson has a NMC or not? Hey, TJ Luckman found a way back in:

Have I put too much #OneBuffalo stuff in this post already? Probably, but here’s some more, because I’m really feeling great about it right now:

2014 was a memorable year for the city of Buffalo. Check out these top stories! INFOGRAPHIC: http://t.co/gUhX1yZxbr pic.twitter.com/Ra5eX96Zt7

Note: Questions? Comments? Have a Smart Thing? You can find Scott Michalak sharpening his skates at @ScottyMCSS.