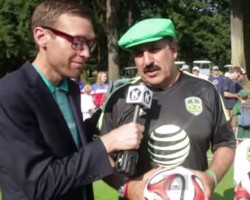 The NHL draft is June 26th.

Strength, possession, position and vision: Eichel does it all in gigantic stride. https://t.co/4YCopDHasT

But who can blame me?

Jack Eichel doing his thing through the neutral zone. https://t.co/YT0UeVx7T8 They glanced at his feet and were turned to stone. Dummies. — Scott Michalak (@ScottyMCSS) May 8, 2015

Jeremy White did some Vine-heavy work on Eichel’s jaw-slackening IIHF World Championships performance over at WGR, which you can find here. It’s highly recommended reading/watching. What this kid can do to NHLers and Olympians already, at the age of eighteen, will embolden your long suffering hockey heart.

From Alan Pergament of The Buffalo News:

Pegula Sports and Entertainment (PSE) has hired a consultant, Allen & Co., to deal with the team’s media issues.

Mark Preisler, the executive vice president of media and content for PSE, confirmed that the company led by managing director Steve Greenberg has been hired to ‘evaluate the best path and strategy for media rights moving forward in TV and digital.’”

It’s long been rumored that such a network could be successful if there was enough content to air year round. But that is where the “E” in “PSE” could really come in handy, as PSE has grown to become more than just sports.

Sit back and enjoy this promo that PSE aired recently at this year’s Sabres University, and imagine the possibilities.

Smart Thing Three: It’s finally OK to gently nudge your golf ball in the hole with your foot

Spare me your kickball invites. FootGolf is coming to Delaware Park, and I don’t think I will want to have time for anything else.

From the Buffalo Olmsted Parks Conservatory:

“The Delaware Park golf course has been revamped to allow both 18 holes of golf and nine holes of FootGolf which has been certified by the American FootGolf League. Starting May 16, 2015, golf, soccer and Olmsted fans of all ages are invited to come out and enjoy this fast-paced hybrid game of soccer and golf.”

I foresee a celebrity/charity event in our future. Let’s make this happen, FC Buffalo.

This is a story about a son helping a father, and a community helping a veteran. We really, really, need to help make this GoFundMe campaign happen:

“Michael Straw is a fully disabled American veteran who served for his country in the Vietnam War with the United States Marine Corps. During his time there, he was infected with the deadly Agent Orange chemical that has taken the lives of hundreds of thousands of soldiers.

He’s suffers from kidney disease, diabetes, degenerative bone disease and has undergone heart surgery and a lung transplant all because of this terrible chemical that was sprayed.

One of the only places of solace he truly has is campsite in Caledonia, NY. He has friends out there that he enjoys talking with, but unless they come to him, he doesn’t get to see them.  He can’t walk very far, and gets dizzy/winded easily. That being said, I have started this go fund me campaign to raise money to help make the caring husband, and most dedicated father, mobile again.

We are raising money to get him a golf cart so he can see his friends and enjoy the time he has. This is a man that has made the largest possible sacrifice you can, and it’s time he gets a thank you for what he’s done.

I’m asking for help in getting Michael a golf cart to increase his mobility, allowing him to visit his friends, not just as a concerned individual, but as his son.

If you can’t donate, share the link. I want this done yesterday.

Thank you for your service, Mr. Straw.

I wouldn’t believe this happened, but this is Buffalo, so it makes perfect sense:

Just saw a random car pull up, say “Cowabunga” and deliver a free pizza to one of the crew members of TMNT2 #Buffalo #CityofGoodNeighbors — Jason Gruenauer (@JasonWKBW) May 16, 2015

Buffalo has a football team on the rise, which is noticing that Buffalo is on the rise.

Buffalo is a city on the rise.

OK, Tyler Ennis, wrap this post up for me if you please: