PREGAME THOUGHTS: America is watching ESPN & realizing how completely in love with the Bills Buffalo really is, & taking notes on how to have fun on Sundays. — Scott… 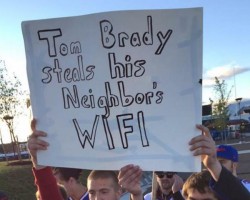 America is watching ESPN & realizing how completely in love with the Bills Buffalo really is, & taking notes on how to have fun on Sundays.

I’m typing this up before the game. Postgame thoughts to follow.

Smart Thing One: Win Or Lose, The Bills Are Incredibly Fun Right Now

The Buffalo Bills are absolutely killing it as an organization right now. They’ve built up hope around an old failing team and an old crumbling stadium, freshened them both up, and made them look spectacular. They’ve (so far) won a game against a big time opponent. Their social media has become witty and sharp – even Kim Pegula herself has taken to the Interwebs, and most everything she tweets is golden.

Even the Bills store has gotten in on the shenanigans.

I like the team taking on the scrappy, smart-ass underdog persona. It’s sports. Have fun. https://t.co/spwiC4jDBC

Currently front and center at the Bills store: pic.twitter.com/2rozjdqCBK

ESPN is currently doing Sports Center here in Buffalo, and you can see how the fans have bought into all of this – because who doesn’t want to buy into fun? Many of us might warn of the larger disappointment that can follow hype, but this is exactly how football games should be. We pay a lot of money for this nonsense, and this noise. Mine as well have fun, right?

Of course, the fans of this team don’t just support the Bills – they’ve come to support each other, too. Resident Smart Thing 26Shirts (now also open in Chicago and Pittsburgh) is overflowing with requests. Heck, if we can raise eight grand to being the Guinness Book-o-Records people to town, we can put up some dollars to help here, too. The need is immediate, and essential. Hit the link below and send a dollar and a prayer or three.

It’s not easy helping all who request it, but we try. Here are some we’ve not yet been able to assist. Maybe you can? http://t.co/eOod823ld3

Someday soon, we’re going to hear Rick Jeanneret’s call of Jack Eichel’s first goal, or goals, overtime blasts, shootout snipes, hat tricks, 20th goal, 30th goal? From Jeanerret to Eichel: I don’t really know a better way to sum up the range of generations that will be enjoying watching this team’s emergence this season. The Bills would be a hard act to follow in any other town right now. Go Sabres.

Smart Thing Three: Well Now! Do The Buffalo Beer Goddesses Have The Event For You

Because we apparently just cannot have enough fun in this town. Mark Thursday, October 1st on your calendars. From the BBG Facebook page:

“Join the Buffalo Beer Goddesses at Mister Goodbar on Thursday, October 1, 2015 for food, prizes, samplings and the debut of the “Feminine Mesquite,” a new Community Beer Works beer brewed especially for Beer Week by the BBGs. 6pm-10pm for members* 7pm-10pm for non-members, $10 at the door Entrance fee for all includes one pint of Flying Bison Brewing Company beer, wings from Goodbar and homemade goodies from the BBGs. Come and see what the BBGs are all about, enjoy some tasty brews and snacks with the coolest girls in town, and support Beer Week in our favorite city. *$25 membership (new or renewal) includes one hour more to party, all the party perks, membership until October 2016 and a free gift.”

10 bucks for a good beer, some good wings, and some homemade goodies. Someone build these goddesses a damn shrine already.

Thanks to @SenKennedy for contributing the “Policy Page” for our fall issue! Check it out http://t.co/0z0ZrgpAi8 #craftbeer #Buffalo

Soon this will be a museum. New things happening everyday here in #Buffalo pic.twitter.com/qtlY6DOrdF

Bonus points in that vid for the Trump mention.

OK, so here we go with my

*** Note: Questions? Comments? Have a Smart Thing? You can find Scott Michalak amongst the throngs of crazed Buffalonians at @ScottyMCSS.