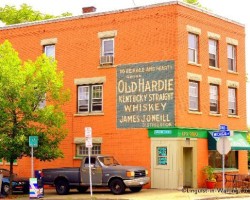 This started with a promotional announcement from WGR’s Twitter account and an amusing reply from Tim Graham of The Buffalo News.

While the tweet may have initially been meant in jest, Graham and Wawrow confirm that they’ll be there… ready to drink beer and talk football. Let’s put these two events head-to-head and see which one is more worthy of your presence.

So far, Graham/Wawrow are in the lead simply by virtue of the low low price of free. But let’s see what you’re getting for your twenty-five bucks. 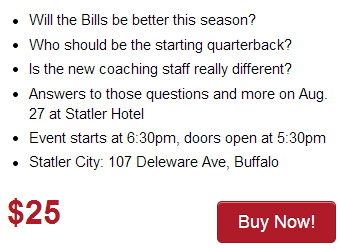 We can answer those questions on our own– Maybe. Tuel. Yes. That was easy. (Also, it’s Delaware.)

Doesn’t seem worth $25 at all unless the “and more” blows us away. What else are you offering, WGR? 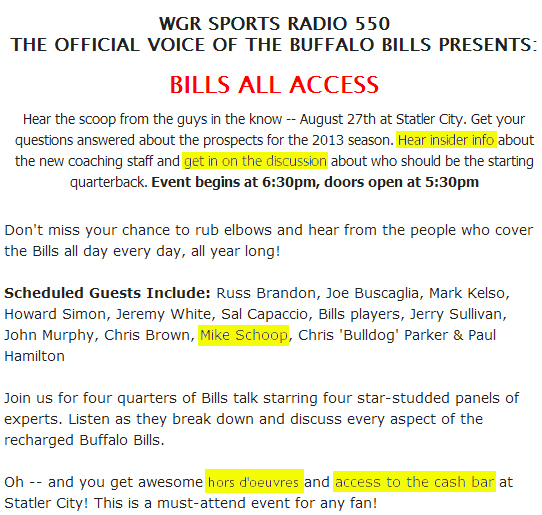 Side note: You misspelled your own guy’s name and, thanks to the shrunken font, we can tell you went the cut/paste route on “hors d’oeuvres”. No shame in not knowing how to spell a fancy French phrase for appetizers– but there should be some shame for making it so obvious…and for messing up “Delaware” and “Schopp”. 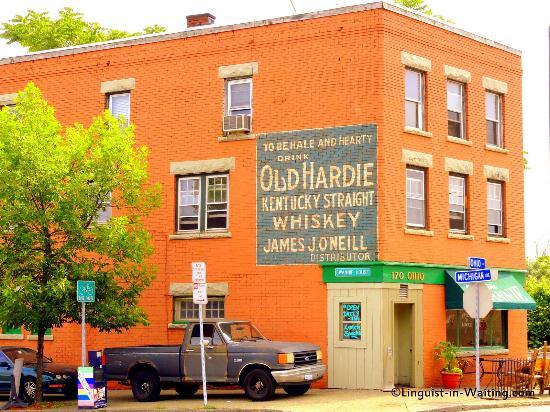 This would likely win an award for Buffalo’s least pretentious bar. Quote from a Yelp review:

I’ll keep it sweet and simple, because that’s how Swannie House rolls…

You come to drink pitchers of beers, and get cheap eats at a very low key/chill saloon. You can’t beat 25 cents wings on Sunday! Especially, when the weather is nice and you can spend your lazy Sunday out on the back patio.

No fuss, no muss…just a guaranteed relaxing time at a traditional Buffalo bar!

I don’t know if I should tell you about this. If you don’t know about this and don’t seek it out, that means my drink wait doesn’t get any longer. It’s means the kitchen can loiter over my fish fry and well-poured Guinness, because yours isn’t a factor. Okay, that would make me a selfish jerk. As I already am that, I’ll share on this point. Swannie is no b.s. dive bar, but a quality one, whose drink specials consist of just not overpricing their fare.

It’s the same night as the other thing but starts at a more reasonable time and ends when all the best parties do– at question mark.

After you plunk down $0, you’ll be granted access to a cash bar– with prices considerably lower than the Statler’s. There will be no food included with your $0 (non) ticket, but it does come with unlimited access to Swannie’s cash kitchen.

WHO WILL BE THERE?

Tim Graham (The Buffalo News) and John Wawrow (Associated Press) have recruited some friends– Bucky Gleason (TBN), Jay Skurski (TBN), Rich Gaenzler (The Fan 1270), Shawn Stepner (WKBW Eyewitness Sports), Jonah Javad (WGRZ Sports), and Paul Peck (UB Football PBP) are all confirmed. We’ll send Brad Riter over there because he owns some microphones that may or may not get used. Even Mike Sullivan from The Kick Is Good will be there. There are other “maybes” on the list and an invitation will be extended to the guys at the “other event” to join in after they’re done with the expensive one. Don’t know if any will show but they’re all friends and most of them like beer so… ya never know.

Spread the word and we’ll see you there.