Is it OK I don’t care enough to form an opinion about it? 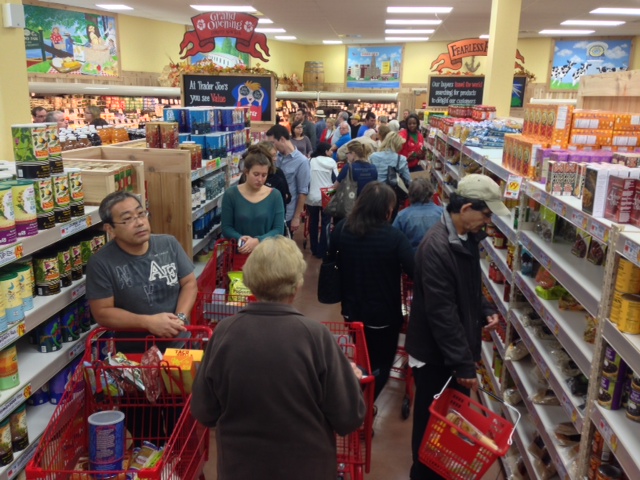 This past weekend, we had visits to several box stores on our to-do list. Since it was Sunday morning, and all of these box stores are each right next to a “box restaurant” where you can get bread-y things for breakfast, we decided to get our Niagara Falls Boulevard visit out of the way before most Williamsville soccer moms are awake to clog the roads and Canadians are still stuck in bridge traffic.

There was no line, but I’m not sure the fire marshal would like how many people were packed inside Trader Joe’s this weekend.

We were able to quickly grab what we needed at three stores, and, well, we just happened to be in the plaza that plays host to the most exciting thing to happen to Western New York since Krispy Kreme opened here.

There were parking spots right in front of the store, and there weren’t any Real Housewives of Snyder clawing at each other in a line in front of the store– in fact, there was no line– so we tried Trader Joe’s, especially since we needed to buy something for dinner anyway.

It’s a grocery store. It has a trendy feel, too trendy for my liking, but so does Wegmans where I shop twice a week. They had what I needed to make chicken soup, and they had generic Cheerios on sale. Fine.

There’s my opinion, but people have been all over the map on Trader Joe’s.

The meat and vegetables were pretty reasonably priced, but you couldn’t possibly do all your shopping there, because the trendy TP looks like its made out of pine cones.

Why do I have to form an opinion on a stupid niche grocery store? We have become a society where you have to love or hate something, and then argue the crap out of why you feel that way.

It’s a store. Some stuff I’d buy, some I wouldn’t. In the 25 minutes my wife and I were in there, three different employees told me they liked my bow tie with buffaloes on it, and three also asked if I needed any help. Based on that, I think it’s fair to say the staff in general is nice, annoying, too perky and helpful.

I just can’t get worked up either way… over a freaking grocery store.

Somehow though, in my ambivalence for TJ’s, as the insiders call it, I feel like less of a man. Like I’ve showed up to a Superbowl party to “just root for a good game.”

“Just pick a team, Sally,” I feel some alpha-male douche snarling at me, and he wants to know about cookie butter and what my feelings are over a lack of “Two-Buck-Chuck” because of our state laws governing wine sales in grocery stores. He hates it, because he has Two-Buck-Chuck in his fantasy league.

I’ve actually been caught in the cross-hairs of a Love TJ’s vs Hate TJ’s battle, with each side trying to sway me with incredible arguments about a grocery store that’s been open for less than 100 hours here in WNY. If only we could corral this passion into something good.

I don’t hate Trader Joe’s. I don’t love Trader Joe’s. It’s meh. But with all this passion about the joint, maybe they should build one in the hole where the Aud used to be.