Dad knows best, so shut the eff up

I did something great yesterday. I told myself to shut the f*** up, and I really meant it.

For a very long time, I’ve been doing an exaggerated impression of my dad, saying with disgust, “Just… shut… the f*** … up–”

He was not a fan of people annoying him by going “chirp, chirp, chirp” as he’d say while doing the blah, blah, blah hand motion. 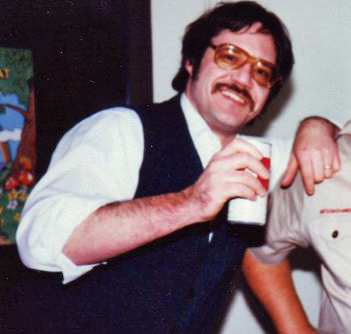 Dad, 1984. He’d have preferred you just have an Old Milwaukee tall boy and shut up.

That phrase, an exasperated, “Just… shut… the f*** … uuUUP–” came out of his mouth when he was at the end of his rope, but more “tired of it” than angry. Of course, that made it an expression commonly uttered by the ol’man, in that exact peculiar way. That strong suggestion would be offered to us kids, to my mother, to the dog, and to the TV when Don Paul was talking about something that didn’t have to do with whether it was going to rain tomorrow.

When I first started saying this phrase in this way in the company of my wife, she no doubt recognized the dramatic style as a nod to the Master of the cranky curse-riddled tirade. As time went on though, and as more and more of my personality (d)evolved into something closer to that of my ol’man’s– I think that phrase has become mine.

We are at a point where my wife knows I’m thinking it even before I do most of the time. She’ll smile, and say, “C’mon, say it.” Honestly, we both know I say it mostly for comedic effect. But as time wears on, that little kernel of truth which makes comedy funny– my actual living, breathing desire for that person to STFU… well, that little kernel seems to be growing into a greater desire for clamped mouths every time I say it. Soon, I too will be swearing at TV weathermen.

But yesterday, I was talking things over with myself, mostly being a whiny bitch, when out of nowhere, I realized what I sounded like in my own head, and had enough. I told myself to just… shut… the f*** … up. Dad would have been proud, because I meant it just as much as the ol’man meant it when Don Paul started cracking jokes about Thanksgiving leftovers one time in 1991 or so.

We all have problems, and even those of us who try to maintain a steely exterior, might sometimes get a little whiny in the doubts that share with ourselves about those problems. I know it’s not the solution for everything, but wow– realizing you’re always a loser when you play the self-pity game, and figuratively punching yourself in the face is really a great feeling.

So, the next time you start to feel all “woe is me,” remind yourself to just… shut… the f*** … up. Or call me to complain. I’ll be happy to channel the ol’man and tell you exactly what I think you should do.