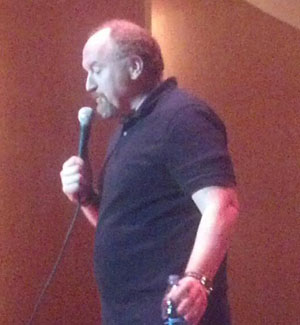 Why Doesn’t WNY Shut Up?

I recently read an interview with comedian Louis CK, who is amazing, in Rolling Stone magazine that prompted me to write this missive. And, for the record, I never subscribed to Rolling Stone. It just keeps coming to my home despite not actually asking for it and their notices of cancellation. How it started being delivered to me is a mystery.

At any rate, in the article, Louis makes a blatant reference to Buffalo and Niagara Falls, NY.

Quote – “Doing gigs in Buffalo and Niagara Falls where people are talking and not that interested in what you’re doing, and you just feel like an asshole. You’re just trying to survive the moment…”

It got me to thinking. He’s wrong. We are the true a–holes.

Know why? Because I see it at every concert I attend. I see it at every stand-up show, every public event. I dealt with it when doing sports talk on WGR. (Quick sidebar – the other day on the Howard Simon show, the board-op let “James in the Falls” on the air. For f—’s sake, I would have put my producer’s head through a wall for letting that clown be a part of the show. Has no one at that station learned anything? I had a standing order that he was never to be let on based on his long history of ass-hattery and bulls— mentality that only added an air of misinformation and combativeness. At the very least, we would park him on hold and see how long it would take before he realized he was never getting any air time.)

Forgive me, where was I? Oh, yes: this region’s inability to shut up.

In 1999, I was able to catch Dave Matthews and Tim Reynolds at UB’s Performing Arts Center. It was a terrible excitement to see a guitar virtuoso like Reynolds alongside Matthews. The two had cancelled a previous show due to illness, so this stop ended up being the last one on their acoustic tour. What happened was a travesty that actually soured the duo from doing acoustic tours for almost two years. Yep, Buffalo. We did that.

I saw and heard it firsthand. I have a copy of the show and it’s disgusting. Morons talking, yelling out their well thought out bulls— and so on. At one point, Matthews stopped a cover of the Stones’ “Wild Horses” to tell people to shut up. How ace. How wonderful. How typical. Last time I caught Allan Holdsworth at the Tralf, some jerk-off was actually whistling along with the music. WHISTLING! I have never seen someone react in the way Holdsworth did – calling the dunce out, chastising him and actually asking for his removal. I wholeheartedly agreed.

This past summer I caught a lot of shows at the Waterfront and saw some of the finest talent ever to grace this Earth kicking ass on stage. What was going on around it? Thousands of people just hanging out, not giving a rat’s ass about the bands on stage and chatting away into their cell phones or with their “BFFs.” Why go to a show when you can do that in your own backyard? Why waste anyone else’s time and enjoyment with incessant useless babbling?

Seriously, go somewhere else and complain about your job. Go somewhere else and rattle off nonsense. Stop doing it around the rest of us who want to see a show. I notice the same thing at sporting events, too. Apparently, it’s more hip to get sauced and talk to one another rather than pay attention to the talent before us.

I’ve been to shows all over the place – Toronto, Ohio, Oregon, Arizona, LA, DC, Florida… you name it. I never notice what I see happening here. And then we wonder why big name acts don’t bother with Buffalo when they set out on tour. Perhaps they know what I know: that we as a group are an unappreciative lot of morons who are so self-absorbed that we can’t close our traps for 90 minutes.

I have a lot of friends who do stand-up comedy in this area and I know how hard it is when people show up to events for the wrong reasons. I can’t believe they have the ability to push through the rudeness. Hell, I can just hang up on someone when they call my show. I like it that way.

Louis CK’s reference to this area is spot-on, and I while I acknowledge it might be this way in other places, when national figures specifically call us out, well, gang, that makes it a different ball game.

You know what I do when I go to a show? I shut up and enjoy the talent in front of me. I suggest the rest of the area does the same.