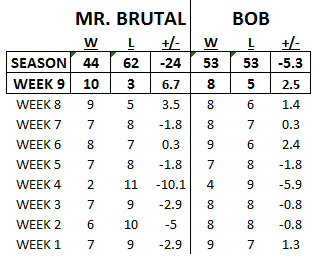 Commence the latest edition of “The Battle of Ohio.”

These two teams are intrinsically linked forever. True gridiron legend Paul Brown managed and coached the Cleveland franchise for a long time and the team was even named after him. But a bitter falling out with owner Art Modell in the mid 60’s led him to be fired and eventually head to Cincinnati as a majority owner with a new franchise in 1970. Not coincidentally, the Bengals adopted similar team colors. The Browns and Bengals from that point on became acid and vinegar rivals.

The late Art Modell was an interesting piece of work. He low-balled employees, cut players for vindictive reasons and was among the most adamant owners in opposing any new freedoms for players. When the best player in football, Jim Brown, was going to miss a couple of weeks of training camp in 1966 because of weather delays in the filming of “The Dirty Dozen” in England, Modell threatened to fine the grossly under paid Brown $1,500.00 a day for every day he missed. Brown said “Screw this!” and instead retired one year early, denying his own team and the fans a last chance to see one of the greatest players ever for one more year.

For years Jim Brown said that his paltry salary and lack of options led him to retire from football prematurely and take up acting and civic activism full time.

Of course, Modell then went on to lead one of the most successful teams in football history into abject mediocrity, infrequent playoff appearances and never coming close to appearing in a Super Bowl again. He attracted dozens of lawsuits over the years regarding his accounting, partnerships and ethics. The worst, of course, was his sleazy movement of the Browns to Baltimore in 1996. This led to more lawsuits, death threats and generally bad karma for the NFL. Of course, Modell was a complete hypocrite as he had opposed all previous franchise moves by other teams and had promised the Cleveland fans (who had given him the greatest attendance in the NFL during his stewardship) that he would never move “their” team.

Only after severe arm-twisting by the NFL, did Modell even agree to leave the Browns name, colors and logo to a new Cleveland franchise that would begin in 1999.

Since the new team’s inception, things have not been good for the start-from-scratch Browns. One of the few highlights each year is the home and home with the Bengals.

The Bengals have had slightly more overall success than the Browns since 1970 and appeared in two Super Bowls,but after their last appearance in 1989 they were the worst team in the NFL for the next dozen years.

These games are usually competitive and there is genuine dislike between the fans, players and cities. For many of these games over the years, both teams have been hopelessly bad, but that didn’t diminish the competitiveness and ill will of their twice-yearly donnybrooks.

One of the most famous incidents occurred in a game not even involving the Cleveland Browns. In December 1989 in Cincinnati, Bengals’ fans started throwing snowballs at the referees and Seattle Seahawks’ players (somewhat emulating the rowdy behavior of Brown’s fans in the infamous Dog Pound in Cleveland Municipal Stadium.)

“Will the next person who sees anybody throw anything onto this field, point em out, and get em out of here! You don’t live in Cleveland! You live in Cincinnati!”

It worked. The snowballs stopped, the Bengals’ won the game and the city of Cleveland never forgave the slight. Some Bengals fans proudly wear patches commemorating the speech with the paraphrase:

“You live in Cincinnati! Not Cleveland!”

In reaction, the “Dog Pound” now traditionally revisits the slight whenever the Bengals visit. They tear up stuffed tigers with their hands and teeth and, on special occasions, guillotine an effigy of Sam Wyche.

Regardless, both teams have something to play for tonight. They are both in contention for the AFC North, but neither looks solid or confident.

Last week, both teams looked shaky at home against mediocre opposition– the Bengals pulling away from the Jaguars on a couple of big plays and the Browns just managing to better the scrappy Buccaneers.

The Bengals had A.J. Green back at receiver. He wasn’t 100% but still caught a TD. The biggest boost was the emergence of RB Stephen Hill of LSU for the Queen City Tigers. Two years in a row, the Bengals have taken the top running back selected in the NFL draft with their second round pick. Giovanni Bernard last year has worked out well, but with his injury last week, Hill picked up the load on Sunday.

The Browns have no Jordan Cameron at tight end, a fantasy league nightmare in non-performer Ben Tate at running back, a simmering time bomb of intrigue and deviousness in Johnny Football sitting on the bench and still yet they manage to win.

Although one would think this could be very close– the short week and greater depth of the Bengals should allow them to distance themselves from their in-state rivals and just cover this spread.

However, this low ratings Thursday night football contest of mainly regional interest will still be more entertaining than watching the other regular television network programming.

The latest installments of whatever pseudo-amalgam of bland auto-tuned singers in a talent show crapfests with self-obsessed judges that happen to grace the prime time lineup are only slightly less captivating than watching mold form on the grout of your bathtub tiles in real time.