QB Trevone Boykin- TCU Fresh off an 82 point performance Boykin struggled in Morgantown. He looked lost at times and his passes lacked any zip on them. He was in… 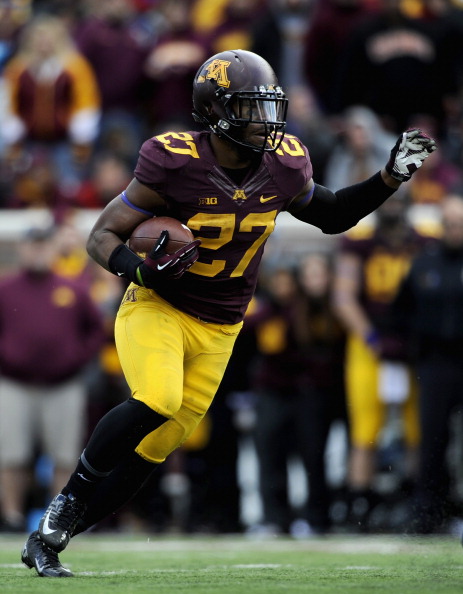 Fresh off an 82 point performance Boykin struggled in Morgantown. He looked lost at times and his passes lacked any zip on them. He was in the Heisman talk for about 15 seconds. In spite of win it was his worst performance of the year.

Lane Kiffin was in a hostile environment in Tennessee… as well he should have been. Kiffin got the ball to his number one weapon in Cooper. Cooper had five catches for 185 yards in the first quarter. He had 224 yards on the day.

Beat Marcus Peters for a TD in his match-up in Washington. Peters rebounded and held strong to only 3 catches for 55 yards on the day. In strong’s defense I didn’t think Taylor Kelly was that sharp in his first game back and the weather was typical Seattle rain.

The number one receiver in the 2016 draft breaks his leg and loses the ball at the goal-line against Auburn. Without a doubt the worst way to lose a game this year.

Crowder has had a lousy season this year but he put up his best performance of the year in Duke’s exciting 51-48 win in Pitt. Crowder had nine catches for 165 yards and two touchdowns.

Had a monster game vs FSU. He had 8 catches for 214 yards. Many of these catches came against FSU’s PJ Williams. Very impressive.

Irish are better than most people thought. Stanley is better than I thought. He hasn’t given up 10 pressures all year on almost 350 pass attempts.

Last year Vic Beasley beat him for two sacks. This year the Tigers defense held Syracuse to 6 points but Hickey didn’t allow a sack from Beasley.

Had six pancake blocks in big win over Ole Miss. This led his offensive line coach to say the “if he isn’t a top 5 pick I’ll kiss my own AS%”.

WV has more than just Kevin White that will be drafted from the offense side of the ball. Spain is a guard getting much attention. He played LT last year. He’s very strong which is a must now for guards.

Four good back in Big 10 this year and Cobb is easy to get lost. Gordon at Wisconsin, Langford at Michigan State and Abdullah at Nebraska all get more press. Gophers having a good year and Cobb is big reason. His numbers match up well with other three. I like the way he breaks tackles and gets yards after first contact.

With 177 yards vs UNC, he’s only 252 yards away from being the Hurricanes all-time rusher. Not bad considering Edgerrin James, Clinton Portis, Frank Gore, OJ Anderson all went there.

Had another good day vs Rutgers. He had two pressures, a sack and a blocked FG. Gregory continues to impress.

A sack and 2.5 tackles for a loss in Florida’s big upset of Georgia. He looked like the best player on the field; he has a great first step and is unable to be blocked by a TE.

Had two forced fumbles and a tackle for loss vs Utah. Second time he has impressed me in a USC loss. He took Connor Halliday out of the game and for the season in the first quarter of USC’s romp over Washington State.

I thought he would have a big game vs USC and a banged up Trojans line but it didn’t happen. Other times I saw him he had great first step quickness. Didn’t see it vs USC.

One of the many disappointing Bulldogs in the loss to Florida. The Florida running game rolled up 418 yards. Floyd is going to have to show better run defense to scouts. His strength is pass rush but you can’t be that much of a liability in the running game.