Syracuse QB Ryan Nassib will merit STRONG consideration when the Bills are on the clock in April.

If you watch this clip and listen to Hackett gush, it’s tough to imagine Nassib won’t merit STRONG consideration when the Bills are on the clock in April. (Start at 3:40 mark. Transcript below.)

Q: How often will you tell players in the future about the Ryan Nassib story?

A: I tell my son. I’ll tell everybody forever. What Ryan’s done, the way that people have questioned him because he’s not a loud guy, because he’s not a rah-rah guy but a guy that’s so passionate about the game, so passionate about his teammates, so passionate about working hard. I mean, what he’s done, for me to come in as a young coach and say “hey, I’m about to teach you how to play football and you’re gonna have to learn an NFL system.” I mean, it was amazing. He just always kept his head down, listened, worked hard, was so coachable, and even to change the system. I mean every time. It was keep your head down and just keep working and he’s always the type of guy that “OK< whatever you give me, I’m gonna be great at it. I’m gonna be great. I’m gonna master this. He just did a great job these three years that I’ve had with him. My dad and I always talk about it. Rarely in college do you get a quarterback for three years. I’m never gonna forget him. I’m never gonna forget all the moments we’ve had up and down together.

Q: What about his NFL future?

A: I’m not sure about that. You never know. Everybody has their own likes and their wants. If I was in the NFL, I know I would want him. He loves the cold. He’s a tough, tough guy. He took some hits today which crushed me because I didn’t want him to take some hits. Just to see him pop right back up and just keep on going-  it just shows how tough he is, what kind of quarterback he really is.

Q: Were you nervous the one time he did stay down? 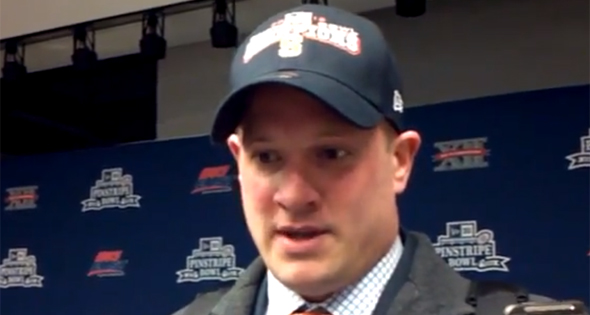