Hi there. Chris here. For a super-fast introduction, I’ll be publishing a column every day for the next 10 days leading up to the start of Buffalo Bills training camp……. 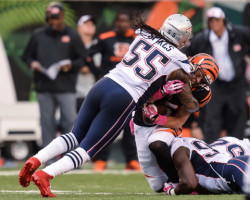 Bills’ run D will FINALLY not be an embarrassment

Hi there. Chris here. For a super-fast introduction, I’ll be publishing a column every day for the next 10 days leading up to the start of Buffalo Bills training camp….

1. I Think I Think The Run Defense Will FINALLY Not Be An Embarrassment

Remember the days when London Fletcher and Takeo Spikes manned the second level of the Buffalo Bills defense? Oh, the memory is a little hazy for you too? No worries, it was all the way back in 2005. The Bills had ugly uniforms then. I do, unfortunately, remember those vividly.

Anyway, that was the last time the Bills had two solid, Pro Bowl-caliber linebackers on their roster, and, unsurprisingly, it was the last time Buffalo had a respectable run defense. Actually, Spikes got hurt three games in the 2005 campaign, so 2004 was the final season in which Spikes and Fletcher played significant snaps together. Buffalo had the No. 8 ranked run defense in 2003 and the No. 7 defense the following year.

Since then, the Bills have finished 28th or worse in total rushing yards allowed per game every season besides 2007 and 2008 when they finished 25th and 22nd respectively. No, that elementary statistic doesn’t always tell the whole story, but it generally gives a good idea of a run defense’s quality.

Over the span of a decade, if 22nd was the best your team finished in any stat category, there were major issues…issues that must be rectified immediately.

Think about it, the clubs with the best (run) defenses have stellar linebacking play. The 49ers, Seahawks, Jets, Panthers, Ravens, the Steelers and Buccaneers of the early-to-mid 2000s. Great linebackers, great run defenses.

Heck, for quite a while now, Bills fans have recognized that the defensive line has been darn good. I’m looking your way, Aaron Schobel, Kyle Williams, Marcell Dareus, and Mario Williams.

But the linebackers have been…to be kind, horrible.

With Kiko Alonso in the mix in 2013, the Bills flashed moments of dominant run defense, but due to his inexperience and tendency to overcommit to outside running plays, in the end, Buffalo fell flat on its collective face once again when trying to stop the opposition’s running back(s).

And honestly, there’s nothing more annoying than a defense that cannot stop, or even remotely slow down the run. It’s a weakness which can be exploited by just about any team and there’s no need for an offense to worry about a quarterback throwing the ball or a wide receiver catching it.

Usually, if your run defense stinks so does your entire defense.

Which brings me back to original point.

I really think the 2013 season finale against the New England Patriots was the final straw for Doug Marrone, Doug Whaley and the rest of the Bills staff that deals with team personnel. I mean, LeGarrette Blount went over 100 yards in the second quarter and finished the game with 189 yards on just 24 carries—that’s just under 8.0 yards per.

Therefore, Whaley and Co. signed Keith Rivers, one of the better / more underrated run-halting 4-3 outside linebackers in free agency. Brandon Spikes, the NFL’s premier run-plugging force inked a deal. Alan Branch, a mammoth and versatile defensive linemen who shined against the run last season, was re-signed. Preston Brown, an undervalued, thumping linebacker was selected in Round 3 of the draft.

Without question, the Alonso ACL tear hurts the Bills’ master plan to bolster the run defense in 2014. No getting around that. He would have shined as a weakside ‘backer next to Spikes.

But with Spikes, Rivers, Brown, Nigel Bradham — who played the run well in limited action in 2013 — Manny Lawson, and the sturdy defensive line, the Bills, believe it or not, will finally not field an embarrassing run defense.

It’s hard to peg an exact ranking, but I’ll write this — I think they’ll finish the regular season with a run-defense ranking better than 22nd for the first time since the days of ole London and Takeo.