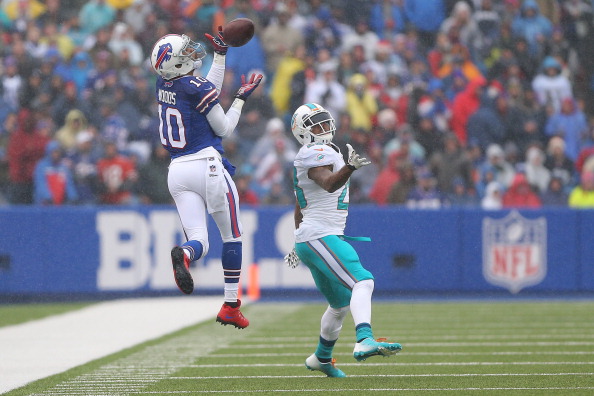 Robert Woods Will Lead The Bills In Catches

2. I Think I Think Robert Woods Will Lead The Team In Catches

We mustn’t forget about Robert Woods. I think he’s going to lead the Buffalo Bills in catches this season, although he’s the easiest-to-overlook player in the offensive skill-position group.

Sammy Watkins is a headliner for obvious and deserved reasons. Sparkling college career. 4th overall pick. The trade up. Mike Williams is an established wideout who’s reuniting with Doug Marrone and returning to his hometown. And, in my opinion, Marquise Goodwin’s three splash plays that occurred in the later stages of 2013 are still fresh in people’s minds, and his world-class speed has been very well-documented.

That leaves…wait, who does that leave? Oh, yeah, Robert Woods.

Honestly though, I totally understand how and why Woods is easy to pass over. He’s a 6’0″, 200-pound, second-round pick without noticeably freaky athletic talents who had a good but not spectacular rookie season. He seems pretty quiet. He’s not a big social media guy.

A nagging ankle injury ( seems like all ankle injuries are nagging, right? ) in his junior season at USC robbed him of some of the explosive, big-play ability he showcased in his breakout sophomore campaign, and he played in his final season in the shadow of Marqise Lee on a Trojan team that underwhelmed after a pre-season No. 1 ranking.

Add evvvverything up, and Woods is an ideal candidate to fly stealthily under the radar in the NFL.

On the field, he’s simply a sound, almost squeaky clean pass-catcher. Actually, that was the book on Woods when he was coming out of SoCal in 2013 — not an abundance of “special,” future-All-Pro ability but a guy who’ll be a very reliable and consistent 10-year pro.

Despite Woods’ somewhat low-key persona and the variety of snazzier teammates around him, he and EJ Manuel demonstrated a strong rapport last year…something that’s incredibly important for a young quarterback to have with at least one receiver.

In the 8.5 games the two played together as rookies, Woods snagged 26 passes for 406 yards with three touchdowns. That makes for a rather hefty 15.6 yards-per-catch average. Extrapolations are essentially educated guesses, but effortless math tells us Woods was on pace for a 50+ catch, 800-yard, six-touchdown year had he and Manuel played the entire regular season.

As many of his scouting reports projected, those numbers certainly wouldn’t be All-Pro or even Pro Bowl-caliber, but the Bills ( and just about any team ) would gladly take 50 catches, 800 yards and six touchdowns from any wideout, especially someone many believe is a “No. 2.”

I’ll discuss Sammy Watkins at length later in this series, I promise. But for as much as I believe he’ll be fed the football a lot — including an assortment of screens, the plays he became the master of at Clemson — I think Woods, with 8.5 games and a year of practices with Manuel already under his belt, will be the second-year quarterback’s favorite target in 2014.

Woods saw 86 targets in 13.5 games as a rookie, and even with a more crowded —and more talented — pass-catching contingent in Buffalo, it seems like 110-120 targets isn’t out of question. From that, 70-75 catches isn’t either.

And I think that’ll do it. If Woods reaches the 70-reception plateau ( I clearly think he will ), he’ll lead the Bills in receptions out of, well, relative obscurity.