1. THERE AREN’T SEVEN YEARS TO FIGURE IT OUT Hearing a lot of this lately? “Well, at least we’ve got seven years until the escape clause kicks in so they… 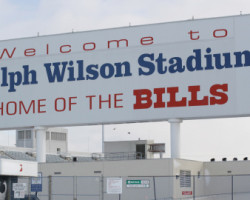 3 Things To Consider About Bills’ Lease/Future

1. THERE AREN’T SEVEN YEARS TO FIGURE IT OUT

Hearing a lot of this lately?

“Well, at least we’ve got seven years until the escape clause kicks in so they have time to figure this all out.”

The escape clause (where the Bills can exit the ten-year lease agreement for a paltry $28 million fee) hits in 2020. That’s seven years from LAST year– SIX years from this one. (How is this error being made across the board?) Tick. Tock.

More importantly, the franchise will be sold well before that time. Let’s make an educated guess– based on research of previous sales– and say that at some point in 2016, the Bills will have a new owner. Want to push it to 2017? Go ahead… it doesn’t change anything. 2018? No chance. (It’s not as though a 52-year-old NFL owner was struck by lightning. People had an idea this was coming. Plans have been made.)

2. NOBODY IS SPENDING $1 BILLION WITHOUT A PLAN

Prospective buyers will make their bids based in large part on where they expect to ultimately locate the franchise. The public may not be privy to this information, but everyone meaningfully involved in the transaction certainly will be. Translation: upon closing of the deal, the team’s destination will be sealed.

If an outside group buys the team with plans to relocate (AND you believe in the power of the ten-year lease), the Bills would essentially play the 2017-2020 seasons in Buffalo as a lame duck franchise. Can you think of a more depressing and torturous fan existence?

At face value, the $400 million relocation penalty included in the Bills’ current “iron-clad” lease seems like a hefty deterrent to any prospective buyer looking to skip town. But when it comes to business and contracts and leases and all that fun stuff, everything is negotiable, including $400 million penalties.

Let’s say a new owner takes control in 2016 with plans to move the team. The new owner says “Hey New York State and Erie County, just a heads-up, we’re leaving in 2020 so you can expect a $28 million check. Cool? Or, would you prefer we give you $100 million today and scrap that whole lame duck thing? We’re leaving either way. Up to you.”

Are the Bills moving?

No clue… but the situation seems much more urgent than many are letting on.