We noted that this would change with free agency. With the Bills signings of OG Chris Williams, ILB Brandon Spikes, OLB Keith Rivers, CB Corey Graham, RB Anthony Dixon and… 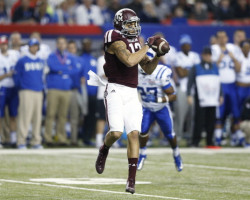 Here are the 7 Players the Bills should draft

We noted that this would change with free agency. With the Bills signings of OG Chris Williams, ILB Brandon Spikes, OLB Keith Rivers, CB Corey Graham, RB Anthony Dixon and re-signing of TE Scott Chandler, I have been forced to change my picks.

I had TE Eric Ebron as the pick here for sometime. Resigning Chandler obviously has changed the way I think they will go. The pick of Evans isn’t too far vastly different from Ebron. Evans is built like a TE. He in fact is a WR in a tight end’s body. This pick will help EJ Manuel. You want a guy that can be a physical mismatch. Looking back to last year, the Bills lost three games where the other team’s QB just threw the ball up and their WR made a big touchdown catch over a Bills DB. Games against Atlanta, New Orleans and Tampa Bay come to mind. Evans is the type of player that can make these plays. He’s 6’5, 231 and ran a 4.53 at the combine. To me, he’s a Vincent Jackson type of receiver. He was great against Alabama and Auburn both in losses this year. He had 11 catches for 287 yards against Auburn and of course the 99 yarder vs Alabama that everyone remembers.

You most also look ahead to the fact you may lose CJ Spiller after next year. Evans could make those electrifying plays that you sometimes get from Spiller.

Moving up the boards as an early second round pick. This is a big jump because at the start of the season some scouts were saying that he might need to be moved in as a guard. Moses had a great year at Virginia. He has the ideal size of a tackle. He’s a mountain of a man and this year he showed that he has the athleticism to even play LT. He passes the eye ball test. He enrolled at VA at 350 pounds and worked down to a trim 320. Here’s a player that could start day one at RT in place of Pears.

Here’s how I see the tackle position going. Jake Matthews (A&M) and Greg Robinson (Auburn) are the first two off the board. They could both go before the Bills at 9.  Taylor Lewan (Michigan) will go next followed by Zach Martin of Notre Dame. You’re now looking at the fifth best tackle in the draft. I believe Moses is fifth followed by Cyrus Kouandjio of Alabama. Kouandjio can’t play left tackle in my eyes. He struggled against Oklahoma in the Sugar Bowl and didn’t look athletic enough at the combine. The Bills don’t need a left tackle. They need a major upgrade at right tackle. Moses is the better player and would be my first choice. If he were gone then I’d still take tackle and go with Kouandjio.

Attaochu played end at Georgia Tech and some see him as an OLB. I think he would be a steal at this pick. I love this guy. He’s a good player that isn’t getting enough attention. He has very good intangibles. He’s very mature and intelligent. His game against Moses was a war. I hope the Bills can get both of them.  Both looked good in the end. Rumor was that Gus Bradley and the Jacksonville team tried to hide him at the Senior Bowl so they could nab him in the draft. Truth is he had hand and hamstring issues suffered at the Senior Bowl which is why he didn’t work out at combine.

At this point of the draft you need to start looking at positions that haven’t been taken as much. For instance fifteen WR’s may have been taken by now but only three or four safeties.

The Bills losing Jarius Byrd in free agency makes this a need. Aaron Williams will be one starter. The next starter to me is up for grabs. Loston is a little bit of a work in progress. He has a great prospect leaving high school. He might be a better athlete right now than a player– but what potential he has. Watch his speed on this 100 yard interception return against Mississippi State. Wow!

He’s a fearless hitter as well. The Bills need a safety and I would take one in the fourth round when most of them are still on the board.

I’m looking for value here. This guy is the definition of value. He tore his ACL at the Senior Bowl and went from a second round pick to a fifth round pick. There is a good chance he won’t play this year. Because of the injury he should still be on the board. You can never have enough corners. Colvin would be a great pick at this spot. He’s only 5’11″ but he plays as a physical corner. He started his tenure at Oklahoma as a safety rather than a corner.  If he were healthy he would have gone three rounds higher. I’d take the risk. For the Bills with the signing of Corey Graham you have Gillmore, McKelvin, Graham and Roby as four quality players at CB.  I think you could let him sit this year and have a quality person next year. Coming into the year he was talked about as a first round pick. A few players passed him but he was still in the mix as a second round pick when he got hurt.

With this pick, I decided to go for a versatile player that can play a few positions for me on the offensive line. Bodine could play any of the three interior positions on the offensive line. He’s very strong. Bodine had the best bench press at the combine by putting up 225 pounds forty two times. Bodine had a better sophomore year than a junior year. He was playing next to Jonathan Cooper and blocking for Giovani Bernard.

He left early and maybe he should have stayed in school for his senior season.

I like him for the Bills because he can play all three interior positions. I know the Bills signed Chris Williams as their starter at left guard but I feel you need eight good lineman going into a year because it seems every year a few get injured.

I like to look ahead and look at value. First, let’s talk about value. There is going to be a good running back available at this point. The running back position is loaded with guys that are going to go from rounds two through seven. Gaffney was a workhorse back at Stanford. He’s a power back that could be the next Marshawn Lynch. I rarely saw the first person bring him down. He showed great ability to break arm tackles. Gaffney is a great athlete. He played minor league baseball in the Pirates organization in 2012 before returning to football in 2013. Gaffney rushed 330 times last year for over 1700 yards.

The reason I believe this makes sense for the Bills is they could very well lose both running backs after this year– Fred Jackson because of age and CJ Spiller because of money. I believe the signing of Anthony Dixon is more for special teams and maybe as a fullback to challenge Frank Summers. The Bills will still go for a RB in the draft.