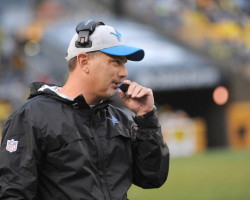 Did Mike Pettine Take Our Fun Away?

5. I Think I Think The Bills Defense Will Be Good, But Not As Flashy Or Fun As Last Year

The Buffalo Bills had an rather sound defense last year. It’d give up some big plays every week, but it was a flashy and fun splash-play machine.

With DC Jim Schwartz — one of the NFL’s most respected defensive minds — at the helm, the Bills will field a solid unit. It just won’t look the same. In fact, it’ll be an entirely different animal.

In 2013, Buffalo led the NFL in a pretty important but not mainstream statistic — yards allowed per drive. According to the fabulous analytics website Football Outsiders, the Bills defense surrendered just 25.79 yards per drive it faced. Yep, that was a lower figure than the Seahawks, 49ers, Bengals, Panthers, Jets, Cardinals…whoever.

( It’s worth noting that the Bills were forced to defend 209 drives last year, the most in football, which is a testament to the team’s offense operating super fast while not being able to consistently sustain drives. )

The flashy aspect came via the sack. Only the Carolina Panthers, a team that registered a ridiculous nine sacks in the season finale against the Atlanta Falcons, had more quarterback takedowns ( 60 ) than the Bills did ( 57 ) a season ago.

I did some number crunching on Pro Football Focus and found that Buffalo’s defense blitzed ( sent five rushers or more ) on 239 of 624 dropbacks it faced last year, or 38.3 percent of the time. That’s a lot. Regardless of blitzing or not, Buffalo’s defense generated what PFF categorized as a “QB pressure” on 251 of 624 dropbacks, good for a strong percentage of 40.2. Heck, Nickell Robey and Da’Norris Searcy combined for 6.5 sacks.

Interestingly enough though, the Lions still forced a quarterback pressure on 238 of the 615 dropbacks it faced. That divides out to a percentage of 38.6, very close to Buffalo’s pressure percentage of 40.2.

Crazy how two teams can go about things so differently but get similar results, isn’t it?

Anyway, what I’m trying to get at is — I don’t expect the Bills defense to blitz as much in 2014. Although Schwartz has confirmed the terminology will mainly stay the same and some blitz concepts will be borrowed from Pettine’s established and super successful system, be prepared for more four-man rushes.

The Lions proved it’s possible to get pressure on the opposing signal-caller without sending the kitchen sink, and it’s pretty fair to say each team has comparable defensive line talent. But, yes, the defensive line will be relied upon more to win one-on-one matchups more often.

I don’t see the Bills sniffing 57 sacks on the year. After all, that total was a franchise record. I expect Buffalo to finish somewhere between 42 – 50 sacks, a range that’d certainly be respectable.

I touched on my relatively high expectations for the run defense and Stephon Gilmore in previous installments and despite the departure of Jairus Byrd — a loss that’ll definitely hurt — the secondary is deeper and more experienced.

The defense will be good, a top 16 unit, but it won’t end the season atop the league in yards allowed per drive or register more than 3.5 sacks per game.

Part 3: Stephon Gilmore will emerge as a legit lockdown corner for the Bills