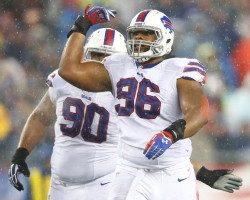 4. I Think I Think Stefan Charles Will Become A Household Name To Bills Fans In 2014

Oh, you’ve kinda-sorta heard of him?

It’s because he played 82 snaps for the Bills last year after making his NFL debut against the Kansas City Chiefs in Week 9.

Not only did he get on the field for Doug Marrone’s club, but he flashed in limited action. He finished with positive run-stopping grades from Pro Football Focus in the outing against the Chiefs, in Tampa Bay against the Buccaneers and in the season-finale against the New England Patriots. Also, he sacked Tom Brady in that game.

Anyway, if you’re a little hazy on who this Charles guy is, he’s a 6’5″, 315-pound defensive linemen from Canada who played his college ball for the Regina Rams.

He went undrafted in 2013 but was signed to the Tennessee Titans practice squad. In October of last year, the Bills signed him to their 53-man roster — the only way in which a team can “steal” another team’s practice-squad player.

I know highlight reels aren’t the best way to showcase someone’s complete game, but check how dominant Charles was at the collegiate level.

For a look at a play on the NFL level, here’s a Vine WGR 550’s Jeremy White included in one of his All-22 review posts last season.

It’s not easy to identify Charles, but he’s the guy who gets doubled initially and sheds the block of No. 76, Brandon Albert, Kansas City’s best offensive linemen and one of the finest left tackles in the game today. Charles slides to his right and makes a diving tackle on Jamaal Charles, a very dynamic runner. ( No relation ) Charles didn’t absolutely dominate against the Patriots sturdy line in Week 17, but he made a handful of splash plays near or behind the line of scrimmage. Here’s a tackle for loss and fumble Charles forced on LeGarrette Blount after he made his way down the line and beat mammoth left tackle Nate Solder. This play illustrates Charles’ above-average athleticism for someone his size.

Here’s the sack on Brady.

Although the coverage downfield clearly helped Charles, he did demonstrate a great deal of effort to initially beat the center who met him at the point of attack and then fight All-Pro guard Logan Mankins to get to the future Hall of Fame quarterback.

A team has to be rather intrigued by a player to sign him off another team’s practice squad onto its 53-man roster.

Sure, Jim Schwartz had nothing to do with Charles coming to Buffalo a year ago, but with his system that relies heavily on defensive line talent, size and pure aggression, this Ontario native should fit in wonderfully.

Add in Marcell Dareus disciplinary issues and Kyle Williams’ age, and you realize the 26-year-old Charles will likely see much more than 82 snaps in 2014.

Essentially, I see him as a slimmer, faster version of Alan Branch, a colossal human who’s been a stout run-defender for much of his NFL career.

Neither are guys who’ll accumulated 6-10 sacks in a given season, but with their length, power and foot speed capabilities, they can play nose tackle, defensive tackle or outside at end in any alignment. There’s major value to that type of versatility.

I don’t think Charles will become a Pro Bowler this year, not at all.

But I do believe he’ll play upwards of 400 or even 500 snaps as a rotational player to keep Kyle Williams fresh and to give Buffalo some beef up front on “traditional” running downs.