View image | gettyimages.com The Buffalo Bills will interview San Francisco 49ers offensive coordinator Greg Roman for their head-coach opening on Friday, per multiple reports. Add him to the laundry… 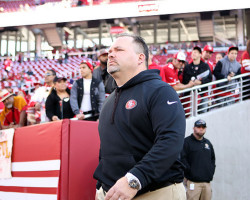 CoachWatch2015: Who is Greg Roman?

The Buffalo Bills will interview San Francisco 49ers offensive coordinator Greg Roman for their head-coach opening on Friday, per multiple reports. Add him to the laundry list of candidates.

I connected with former Bleacher Report Senior NFL Editor and San Francisco resident Dylan MacNamara to get the scoop on Roman.

1. To the best of your knowledge, explain Greg Roman’s general offensive philosophy and / or scheme.

MacNamara: Greg Roman’s scheme, traditionally, is built around the power run game. When the 49ers were at their best over the last several seasons, it was because they were effectively running the ball with Frank Gore out of a 21 personnel look (or similar), with Bruce Miller leading the way.  That setup the passing game, which vastly improved Alex Smith’s play and landed Colin Kaepernick a big contract.

Roman is famous for implementing a lot of pre-snap motion, sometimes featuring three or four guys re-aligning before the ball is snapped.  He is a creative run-game play-caller.

In 2013, and particularly this season, it seemed Roman tried to diversify SF’s offensive menu, moving to more three receiver sets. The results were horrendous. The 49ers finished 30th in passing in 2014, despite Kap’s 50  more throwing attempts than 2013. He also threw two fewer TDs and had 2 more INTs. Part of the blame lies with the lack of playmaking ability in the 49ers WR corps, but on a play to play basis, Kap was asked to make difficult throws in tight windows. He has all the physical talent in the world, and under Roman, the QB regressed greatly.

2. Obviously, Roman worked hand-in-hand with Jim Harbaugh since their days at Stanford. Do you think Roman’s time spent with Harbaugh could make him a good head coach? What are some potential negatives?

MacNamara: This is difficult to quantify. Anecdotally, it appeared as if Roman fell out of favor with some offensive players this season, particularly Michael Crabtree, Anthony Davis, and at times, Frank Gore.

This is also a guy who doesn’t have a ton of NFL experience, at least comparatively to other HC candidates interviewing this offseason. He was the OC of Holy Spirit High School in New Jersey… in 2008!

Of course, there is a precedent for a jilted 49ers OC finding success as a HC with a new team: Mike McCarthy was hired by the Packers in 2006 to be their head man, after a 2005 season in which the 49ers sported one of the NFL’s worst offenses and Alex Smith threw 1 TD to 11 INTs.

That doesn’t really hold much bearing, re: Roman, but it proves that sometimes a change of scenery, and personnel, can do wonders for a coach.

3. During his first few years in San Fran, Roman’s offense boasted one of the best running attacks in the league, but usually had growing pains with the passing game. Were those issues mainly due to Roman’s scheme / play-calling or Kaepernick? How much do you think injuries played a role in the offensive downturn in 2014?

MacNamara: I referenced this a little bit already, but the answer is probably a combination of a few things, namely: play-design/play-calling, lack of explosive weapons and Kap’s inability to mature as a quarterback.

I asked Chris Simms a couple times over the course of the season why he thought Kap was struggling and his answer was pretty simple: He was asked to do more on every throw than probably every other QB in the NFL. You’d have WRs, who weren’t able to create separation, running 15 yard outs or 20 yard digs on a consistent basis. It seemed almost every throw Kap was asked to make required every bit of his world class arm-strength. If Kap was asked to do what say, Peyton Manning was asked to do, on a throw-to-throw basis, he’d be a completely different player. Quick screens, or really any sort of easy throws, were few and far between.

Of course, some of that was due to the fact that SF’s top two WRs (Boldin & Crabtree) both run somewhere between a 4.6 and a 4.9 40, but Roman didn’t appear willing to make adjustments that would help his passing game.

And don’t forget, Vernon Davis was completely non-existent for most of the year. I have no doubt that part of the blame lies with VD’s work ethic, and he was battling some injuries, but he’s the one guy on that offense who can create real mismatches for a defense, and he was ignored game in and game out.

4. The Bills are, essentially, a semi-competent QB away from being a scary playoff team, and EJ Manuel’s still on the roster. Do you think Roman has the knowledge to be a good teacher of the quarterback position / help Manuel’s development? What would you takeaway the most from the time he spent with Kaepernick?

MacNamara: Based purely on what I’ve seen out of Kap’s development over the last two seasons and some change, I can’t say with any confidence that Greg Roman would be a positive for EJ Manuel’s development. The numbers tell part of the story: His AY/A (Adjusted Yards Gained Per Pass Attempt) dropped from 8.6 in 2012, to 7.8 in 2013, to 6.9 in 2014. His passer rating followed a similar trajectory, dropping from 98.3, to 91.6, to bottoming out at 86.4 this year. Ask any 49ers fan and they’ll agree that the eyeball test verifies the numbers: Kap’s play has deteriorated greatly since the Niners made their Super Bowl run, post-Alex Smith benching.

There’s no doubt that Kap has some limitations, namely in accuracy and ability to diagnose a defense. But he has such immense physical talent that one would assume better coaching and improved playcalling would’ve improved his play over time, or at least stabilized it, not sent him into a regression tailspin.