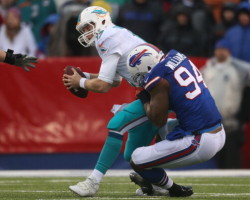 I Have Figured Out Mario Williams

7. I Think I Think I Have Mario Williams Figured Out, Kind Of

After watching all 1,979 snaps Mario Williams has taken with the Buffalo Bills since he joined the team two years ago, and after reading a slew of accounts from Houston-area media members about his time with the Texans, I feel as though I have figured out the No. 1 overall pick in the 2006 draft as a football player.

At the very least, I now feel comfortable making an educated guess about him.

After a roller-coaster 2012 when Williams battled injuries during a season in which he registered “just” 10.5 sacks after he signed a mega six-year, $96 million dollar contract that features $50 million guaranteed with the underdog Bills, many onlookers were tough on Mario.

After 2013, a year in which he upped his sack total to 13.0 and was noticeably more disruptive, the criticism subsided, but the general thought has centered around him being an overpayment.

Here’s the deal with Williams.

He’s not going to register 20-something sacks in a given season.

Wait, isn’t it a bit much to ask 20-something sacks out of anybody?

But at his mammoth size with absolutely freakish athleticism, if Mario was wired a bit differently on the field, he certainly could be a 20-something-sack player.

You thought Jadeveon Clowney had an amazing combine this year?

Williams measured in at 6’7″ and 295 pounds at the Under Armor Olympics in 2006. He ran an official 4.70 in the 40-yard dash. He showed off a 40.5-inch vertical leap. He benched 225 pounds a whopping 35 times. His three-cone and 20-yard shuttle times were better than Clowney’s although Mario was nearly 30 pounds heavier.

Because of all that, it’s easier for him to be a target for disparagement than someone like Kyle Williams, someone who went in the 5th Round and is a downright, out-of-his-mind warrior on every snap.

Does that mean Mario’s lazy?

Overall, he plays hard throughout the year, over the course of 1,000+ snaps. He’s essentially a lock for double-digit sacks.

Also, he’s a sturdy run-stopper and a monstrous specimen who will command, eat and occasionally beat double teams.

All those truths…very valuable as well.

At his size, with his length, power, pass-rushing prowess and run-haulting talents, Williams is the consummate 4-3 defensive end.

Heck, signing Williams was a huge win for Buffalo — it marked the first time in a long time the city and team weren’t spurned for flashier surroundings and a more relevant franchise.

The Bills absolutely need him, and I’d say he’s one of the most important players on the entire team because of what he brings to the field and how his presence has a ripple effect across the defensive line and into the linebacking corps and secondary.

But he’s not an outgoing media darling who necessarily welcomes the spotlight. He’s not an overt vocal leader.

Given his stature and physical gifts, many expect him to be those things, and that’s precisely when and where Mario is misunderstood.

After being the No. 1 overall pick and signing two incredibly lucrative contracts in his NFL career, is he maybe not as motivated anymore?

Without ever talking to him, I can’t make that claim. However, I wouldn’t totally fault him if that was the case.

I think of it like this…we want NFL’ers — actually all professional athletes for that matter — to be outrageously driven and go bonkers every second of every play.

We correctly see them as men who won the genetic lottery and are in a minute percentage of the population that gets paid very handsomely to play the game of football.

If only we  were in their shoes, we’d ALL be the Kyle Williams-type, right?

That’s what we tell ourselves, but I bet a large percentage of 29 year olds would act similarly to Mario if they found themselves in his exact situation today.

Maybe he’s just an introvert who’d rather mix in with the crowd and play a key role on a team than be the outward and unquestioned captain.

That’s more likely than him being unmotivated, and it’s totally fine.

So, for some, I think the expectations of Mario need to be changed.

Could he be a 20-sack havoc-wreaker if he was a high-motor individual?

But there’s a chance he’s a more calculated defender than we give him credit for, and if he did go 100 mph on every snap, he’d be out of control and, potentially, not as durable.

In the end, Mario’s probably not going to play as noticeably hard on every down as linemate Kyle Williams will.

He’s probably not going to suddenly open up with the media.

How he acts off the field — as long as he’s not breaking the law — shouldn’t matter.

He’s going to be Mario Williams, a well-rounded, three-down 4-3 defensive end with a menacing physique who’s an integral figure on Buffalo’s defense.

The Bills are lucky to have him.