Bob Gaughan looks at this year’s crop of QBs. 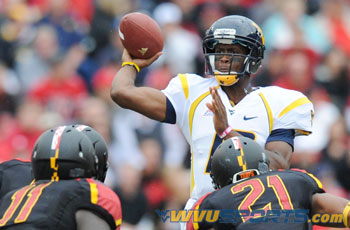 Bob Gaughan watches more college football than anyone you know. We asked him for his quick thoughts on the top prospects in this year’s NFL Draft. (If you start following him on Twitter, maybe he’ll even start tweeting.)

Geno Smith, West Virginia – Like size, arm strength. Good accuracy and good downfield throws. Didn’t think the disappointing season for WV was his fault at all. No defense. He put up points or moved the ball in every game I saw.

Ryan Nassib, Syracuse – Nassib is a three year starter with a good enough arm. He’s very accurate and ran a pro style of offense. Threw for 470 yards and 4 TDs in opening loss to Northwestern- his first game with a new offense.

Tyler Wilson Arkansas – Tough to gauge. Ran for his life a lot.

Matt Barkley, USC – Season went south early. Didn’t like how he handled pressure at times. Not helped by Leinart and Sanchez failures.

Mike Glennon, NC State – Scouts range from 2nd to 7th round. Great arm, but questionable leadership ability. Very inconsistent. Had a horrible game against Vandy in the bowl game.

Landry Jones, Oklahoma – Great when given time but suspect decision under pressure.

Tyler Bray, Tennessee – Leadership a question. Very thin. Like Glennon some have 2nd round grades and other teams as low as 7th.