(Greg just wrote a title and then recapped the writing of the title.) 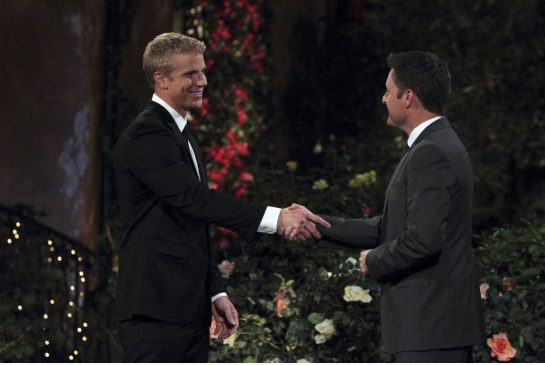 (Greg just wrote a title and then recapped the writing of the title.)

I recap the Bachelor, and I have absolutely no idea what’s going on. Who is Sean? What’s a rose? Who can’t control their eyebrow? I’m not sure. Luckily, ABC hates America enough to roll out a special 1-hour ‘tell-all’ interview featuring everyone’s favorite rose-count warner, Chris Harrison and everyone’s favorite shirtless guy, Sean Lowe. I said I wasn’t going to recap this mess, but I also tell cashiers that there is only one muffin in my deli bag (Attn. Recap Insiders:  There are 2 muffins inside of my deli bag!)

Chris Harrison says that Sean is going to “tell all.” I hope he tells me why Major League Baseball won’t let me watch Pirate games in Buffalo. (Sports quota filled… also, I can re-use old jokes if ABC is just going to repeat crap.)

The good news about this recap is that you don’t actually have to read it. I didn’t have to watch this episode. I’ve already watched it. You already read about it. There is no new content. Chris and Sean just sat down and played clips. It’s like the ‘Family Ties’ where the Keaton family sat on the couch and talked about past episodes. There was a kangaroo in my living room. Sorry about putting the ‘Family Ties’ theme in your head. I’ve been drinking.

We begin with Chris Harrison and Sean Lowe in a dark room. They are in suits and sitting in front of a raging fire and 4,000 candles. I’m sure that warmth is welcome considering they’re in the frigid climate of Los Angeles, California. Chris Harrison says, “It’s hard to believe we’re back here.” I don’t really understand what he means. If he means that it’s hard to believe this network would sink so low as to roll out a clip show and call it ‘very special’ then, yes, that’s a bit hard to believe. If he means that it’s hard to believe that they’re back in L.A. and talking about Sean’s journey instead of being sucked into the depths of Hell by the Devil for constantly torturing husbands with their bullshit program then, yes, that’s also a bit hard to believe.

“I had no idea I’d develop such strong feelings for 3 different women”. – Sean Lowe on his Bachelor journey. It’s also my yearbook quote.

Anyway, Sean continues to tell all. ABC shows the footage of Desiree’s brother being mean to Sean. Again, this is all fresh in my mind and I didn’t really need this very special episode, but I’m not the President of ABC. He or she knows best. I hope they are also in front of a fire, or possibly in it.

As we watch Sean have his character attacked by Desiree’s brother, Sean tells Chris Harrison that he had to restrain himself from fighting. He says, ”Anyone who knows me, knows that I’m the furthest thing from a playboy.” Even if you don’t think you’re technically a playboy, you should probably stay away from saying “furthest thing.” I think the furthest thing from a playboy would be a guy who was dating zero women, not 25 of them. I think someone who was far from being a playboy would typically have zero minutes of shirtless video aired on a national television broadcast, not hundreds of minutes of shirtless footage. I’m pretty sure a guy who was far from being a playboy would not make out with 6 women in one evening. The furthest thing from a playboy is currently playing ‘Call of Duty’ in his mom’s basement while screaming at some kid on a headset and jamming pizza rolls past his green teeth. He’s not sitting on a hill with his girlfriend drinking wine and making out.

We are treated to some new, unreleased footage where Dez’s brother (she’s Dez for a second) actually laughed with Sean and said that he liked him. It’s unclear why Dez’s brother turned the tides. I’m guessing a producer handed him an envelope, but I’m cynical.

Sean says that he isn’t sure if Dez’s brother ruined her chances of keeping her on the show. Thanksgiving should be fun at the Dez house. Sean says that he has all of the respect in the world for Dez, leaving no additional respect for our armed forces or pediatric surgeons.

Commercial break side note: Splash? Seriously? Just celebrities jumping into a pool? That’s a TV show? We couldn’t make those celebrities hand out blankets to homeless people or chase bears? If I find out that any one of you watched ‘Splash’, we’re not friends anymore.

We’re back from commercial and there is so much talking that it’s hard to keep up but, Chris Harrison is back in front of the fire with Sean and they’ve moved on to Sarah with one arm. Sean says that Sarah seemed so smart. I would beg to differ on that, but I’m not The Bachelor.

They show Sean kissing Sarah while not looking down at her nub. Then, they show Sean dumping her and her snot-filled goodbye. Again, I watched this all before and it is surprisingly less interesting the second time around.

Sean admits that he dumped Sarah because of her kiss. That should make her feel better watching from home. “Hey, dateless! I didn’t dump you because you had one arm. I dumped you because your kiss reminded me of a lifeless lump of mashed potatoes.” That ought to boost her self-esteem.

Chris Harrison says that, “Women that leave this show have learned a lot about themselves.” I think he’s right. I think that they learn that it’s probably not a good idea to look for love in a place where 24 other women are looking and, if you do want to fish in that pond, don’t tell the fisherman that his other fish are out of their minds. That’s a lesson from which we all can learn.

There is more repeat footage of big-boobed Selma, the Iraqi and Leslie the girl that kissed Sean for 4 minutes. The entire episode, ABC pops up tweets from viewers on the bottom of the screen. They refused to put up my tweet about Jochen Hecht. That questions my integrity. The tweets are all very nice and supportive of Sean. There’s nothing about how filthy this program is or how this super nice guy is going to have sex with a girl and then dump her next week.

Leslie’s recap is next. They show the slurpy-good kiss with Leslie. Sean says, “The chemistry was there, it was apparent and I think America felt it.” I felt the chemistry… in my pants. There is more unreleased footage of Sean and Leslie eating a brownie and talking dirty. I did not make that up. Chris Harrison calls Leslie a fan favorite. Sean admits that he may have kept Leslie if she told him that she loved him. It’s nice for her that she now gets to live the rest of her life full of regret. Good thing Sean is telling all.

The next commercial break features a Taco Bell chef showing how hard she and the Taco Bell crew worked to perfect their Cantina Steak Burrito and I’ll bet the 16-year old kids in the Taco Bells around the world will risk their lives to uphold that sacred integrity.

Chris Harrison and Sean are back in their chairs to continue to tell all. I can’t believe they’re going to fit it in an hour-long program. Tierra is the next topic. It’s pointless because we’ve already seen this but, again, I’m not in charge here. There is terrible Tierra footage and yelling and Sean says that he feels stupid for falling for Tierra’s game. I’m guessing it had something to do with her chest.

Chris Harrison brings up the criticism he’s read that Tierra is planted, and he and Sean laugh off the notion that Tierra’s place on the show was fake or forced. Chris Harrison fails to point out that his production crew purposely seeks out unstable personalities to build drama and then puts these personalities into situations with opposite personalities in an attempt to get everyone to cry. It’s not mentioned. I thought Sean was telling all!

There’s more footage and talking. They show some drunk girl. They show a girl roll up into a ball and sit in a wheel. The girl who always looked like she was trying to hold food in her mouth did a Chris Harrison impression. I think about punching a hole through my television until I consider how much better this show is than the Sabres game.

Sean finally starts telling all when Chris Harrison brings up the Fantasy Suite dates next week. Harrison hints at how America assumes there will be sex things going on in said suites. Sean does not tell all. He avoids the question. Harrison, always the professional, rephrases his sexy question and says, “You know the expectation for the overnight date. There’s a chance to be physical. What do you say to that?” Sean says, “I say, it’s really none of your business”, to which Harrison says, “A gentleman to the end.” So, to recap, when a host asks you if you’re going to sleep with 3 women and then dump one of them, and you say that it’s none of their business, you’re being a gentleman… to the end.

They end the show by previewing the rest of the season and they make it look like Sean dies in a cave and then gets left at the altar by the girl he chooses to be engaged to for six months. We know, of course, that these things don’t happen but, not because Sean told us that. He’s terrible at telling all.

Greg Bauch is the author of ‘Frank Dates’.