#455454816 / gettyimages.com When your team stinks, power rankings are the worst. You know they lose a lot, you know they’re in the cellar, but that doesn’t stop the pithy… 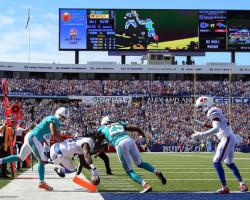 Power Rankings: What they’re saying about your Bills

When your team stinks, power rankings are the worst. You know they lose a lot, you know they’re in the cellar, but that doesn’t stop the pithy little comments (and the accompanying downfard-facing arrows) from making things even worse.

When your team starts 2-0, power rankings are fun.

When your team starts 2-0 in a season where expectations are low, they’re even better.

Here’s what “they” are saying about your 2014 Buffalo Bills.

Say what you want about C.J. Spiller and how the Bills tend to use him; the man can flat-out fly. His kickoff return was more than highlight stuff — it answered a Dolphins field goal, returning control of a key AFC East matchup to Buffalo’s hands.

Love that this team is 2-0. Love even more that the Bills are staying in Buffalo. Love less that I missed this game pick, but, well, I don’t really care. The Bills are not leaving the city in which they were based when they won the 1964 and 1965 AFL championships, as well as four straight AFC crowns under Marv Levy. And don’t sleep on the Ground Chuck years, either.

They have a chance this week to show they are for real with San Diego coming to town. EJ Manuel has done a solid job the first two weeks.

Once again the Bills dominated the line of scrimmage. Although they couldn’t establish the running game this week, several big plays by Sammy Watkins and a 102-yard kickoff return by C.J. Spiller sealed this win.

If the Clemson connection of Sammy Watkins and C.J. Spiller keep clicking, just maybe this team will prove legit.

Buffalo ranks sixth in both rushing yards and rushing yards allowed per game. The Bills are 2-0 for the first time since 2011 but host the Chargers next.

Big, big jump for the Bills here. Wins over Chicago and Miami were quality victories. I’m not sure how the Bills are 2-0, but they are, so here you go.

The Bills continue shooting up the rankings after knocking off the Dolphins at home. Both of their wins have come against worthy opponents (the Bears in Week 1), and a balanced attack on offense combined with good use of their weapons has helped EJ Manuel settle in as the starter. These Bills and their tough defense could be the real deal.

11. Buffalo Bills (last week: 23)
I get that the preseason doesn’t mean anything, but the Bills offense looked incompetent during the exhibition slate. Now, after thumping the Dolphins at home, Buffalo is one of just seven undefeated teams left. Go figure.