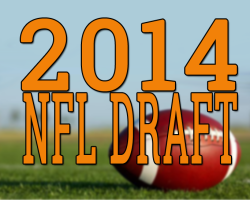 Senior Bowl Recap: Moving Up and Down

It was a big week in Mobile, Alabama for some NFL-bound college seniors. Here’s how they fared.

Players that Moved Up:

Dee Ford- OLB Auburn- may have easily moved into first round. One scout said that no one blocked him all week. He showed great pass rush moves. Versatile can play in 4-3 or 3-4. Had an impressive game as well beating Mewhort for one of his two first half sacks. He was named MVP of the Senior Bowl.

Aaron Donald- DT Pitt– I hoped the Bills could get him early in the third round. Not after his performance this week. He’s a little short but what a great penetrator. Don’t ask him to hold ground just get in and disrupt things. He showed that all week. He moved up at least a round to early second and maybe higher.

Stanley Jean Baptiste- CB Nebraska– everyone is now looking for the next Richard Sherman minus the mouth. He showed that his best fit is in press coverage. Love his size of 6-3 215.

Derek Carr- QB Fresno State- Carr was helped by being the number one QB at the Senior Bowl. He showed off his great arm. Best arm in this class of QB’s coming out. More than that he was accurate and scouts were impressed that he stayed after practice to work with receivers on his own.

Ra-Shede Hageman- DT Minnesota– Very coachable. Scouts thought he played too high in college. He’s tall at 6’6. He impressed by being a quick study and performed very well in drills. He helped his versatility being able to play in a 4-3 or 3-4.

Jimmy Garoppolo- QB Eastern Illinois– He was invited because AJ McCarron backed out. He made the most out of it. He impressed with a quick release and good accuracy. He was the MVP of the East-West shrine game earlier.

Weston Richburg- Center Colorado State- great week of practices. Went from being the fourth best center to the first or second.

Zach Martin- OT/Guard- short arms that could hurt. Some teams may see as just a guard. That being said he had a great week of practice. Everyone loves the way he plays. He was the best offensive lineman at the Senior Bowl.

Jack Mewhort- Ohio State  Not pretty but effective. See as a solid right tackle. Gave up a sack to Ford in the game but still had a solid week of practices.

Chris Borland – ILB Wisconsin- scouts loved him, he was an animal. Some compared to Luke Kuechly and I don’t see that at all. Not an impressive body. He’s a great football player. Reminds me of Zach Thomas at best.

Christian Kirksley- OLB Iowa- showed great pass rush skills. Very good combination of size and speed. Showed he could do more than he did at Iowa.

Deone Buchanon- SS Washington State- showed ability to cover and stuff the run which is what you want to see out of a SS.

James White- Wisconsin RB- shared the load with Melvin Gordon this year with the Badgers but had a good week of practice and a very good game to top it off. He was the North’s most outstanding player rushing for 62 yards and making five catches in the game.

Michael Sam- DE Missouri- he was tried out at OLB early in the week and he didn’t perform well. Unlike Dee Ford that showed his versatile Sam showed he is just a pass rusher in a 4-3. He did beat Billy Turner (see below) for a sack in the game.

Aaron Colvin- CB Oklahoma– he’s the poster child of why guys skip this game. He tore his ACL in practice and now moved from a 2-3 round pick to a fifth rounder.

Will Sutton- DT Arizona State– looked heavy and slow in drills. I think teams would prefer him if he lost 15 pounds.

David Fales- QB SJ State– Poor arm strength and lack of height not a good combination. He did rebound with a good practice Wednesday and a decent game.  But you know what they say about first impressions.

Adrian Hubbard- OLB Alabama- one of those guys that can only move forward. As an OLB he might at sometime have to cover someone. He struggled in coverage.

Billy Turner- OT North Dakota State– Some thought maybe a third round pick. Not after this week. He didn’t step up against the better competition.

Tajh Boyd- QB Clemson– None of the North’s QB’s looked good but Boyd is the most disappointing to me. Accuracy is the one thing I look for most and he isn’t great in that area.

Cyril Richardson- Baylor Guard Thought he could go in the first round as some of the better guards have gone in previous years.  That’s not going to happen. He had a tough week.

Seantrel Henderson- OT Miami-Florida– He was down right awful in the game. He gave up sacks or pressures to Dee Ford, Kyle Van Noy (BYU) and Chris Smith  (Arkansas). He’s a mountain of a man but his game has never lived up to his hype.