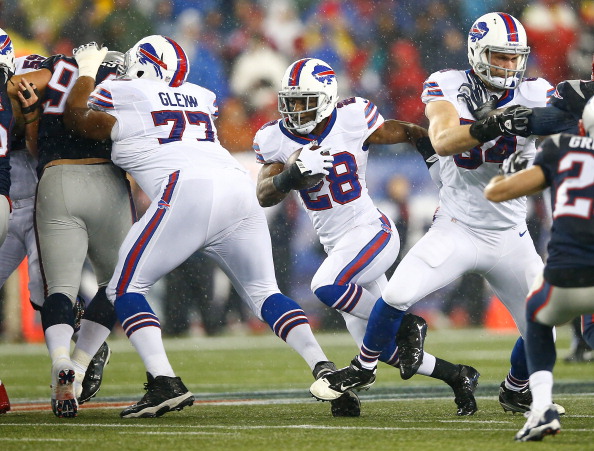 4. I Think I Think C.J. Spiller Will NOT Be The Bills’ Clear-Cut Offensive Focal Point Or Get 20 Touches Per Game

C.J. Spiller will be an integral facet of the Buffalo Bills offense in 2014, but I don’t think he’ll be the team’s unquestioned centerpiece.

There’s too much talent on the his side of the ball now, and four years into his NFL career, it’s obvious — Spiller is best and, most importantly, hits optimal efficiency when he’s seeing the ball fewer than 20 times per game.

That’s not necessarily a knock on Spiller’s reliability or durability.

In today’s NFL, we know it’s rare that a running back sees the football more than 20 times every Sunday. Utilizing ground-game committees is smart because it keep legs fresh and thereby prolongs the shelf-life of backs. However, in a recent BuffaloBills.com article on the running backs, Lead Journalist Chris Brown wrote:

“If the offense is operating at peak efficiency Spiller is likely to touch the ball 20 times a game, they just won’t all be carries out of the backfield.”

For as nice as that sounds, I don’t envision it happening.

Fully healthy and essentially entering a contract year after an injury-plagued and somewhat disappointing showing last season — he still averaged 4.6 yards per carry — many share Brown’s sentiment that high expectations should be set for the uniquely talented Spiller.

With more skill across the board and EJ Manuel and Robert Woods entering their second NFL seasons together, Buffalo’s offense should be more efficient this year, so more plays could be run in Nate Hackett’s up-tempo attack.

But I highly doubt Spiller will see close to 20 touches per game. That allotment equates to 320 total touches over the course of a full, 16-game season. In 2013, only nine running backs saw more than 300 total touches and only five hit the 320-touch plateau.

Heck, even in Spiller’s epic 2012 campaign — when he averaged 6.0 yards per carry and was the finest running back in football not named Adrian Peterson — the former Clemson star received “only” 250 total touches, a 15.6-touch-per-game average.

And that was the season in which Fred Jackson managed to play only 10 games and Tashard Choice was the No. 3 back on the roster.

The Denver Broncos ran the most offensive plays in football a season ago (1,156) which divides out to 72.25 offensive snaps per game.

If the Bills, a team that ran the third-most offensive plays last year, (1,116) were to reach Denver’s 2013 figure and Spiller were to receive 20 touches per game, the Bills would be giving him the football nearly 28 percent of the time.

Re-check the list of play-makers I listed. Buffalo should and likely will feature all of them in one way or another and, obviously, at differing levels of regularity.

The additions of Dixon and Williams, the re-signing of Chandler, the trade-up for Watkins and the deal to get Brown show the Bills have made depth the top priority and want to field an offense that can hurt a defense in a variety of ways.

Because of the assortment of skill that can now emanate from even a four-wide receiver set, there simply won’t be enough plays to go around to get Spiller to “clear-cut offensive focal point” status or, you know, those 20 touches per game.

Lastly, as Brown’s quote mentions, the 20-touch-per-contest assertion is contingent upon the Bills offense operating at “peak efficiency,” something that’s much more of every offensive coordinator’s pipe dream than a reality every week in the NFL.

A bad defensive outing, playing a premier offense, allowing a special teams touchdown, or a day in which the quarterback is in rhythm with his receivers — just some of the roadblocks that hinder the chances a running back sees a high-amount of touches in a given game.

Though I do think the Bills coaching staff wants to run as many plays as humanly possible, I believe Doug Whaley, Doug Marrone and Hackett have clearly made efficiency and diversity, not sheer volume, the fundamental tenet of the offensive game plan.

That means C.J. Spiller will be a 12- to-15-touch-per-game spark plug who’ll blend in perfectly with Buffalo’s mixture of offensive weapons this season.

Part 3: Stephon Gilmore will emerge as a legit lockdown corner for the Bills