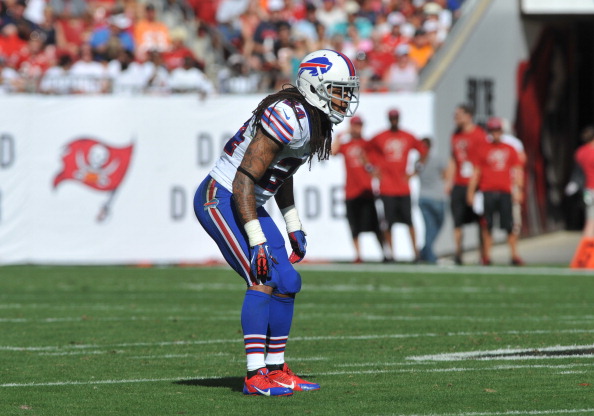 Stephon Gilmore Will Emerge As Legit Lockdown Corner For The Bills

3. I Think I Think Stephon Gilmore Will Emerge As Legit Lockdown Corner For The Bills

Coming out of South Carolina in 2012, there wasn’t much to dislike about Stephon Gilmore’s game. From a physical standpoint, his height, length and exceptional fluid athleticism made him a premier cornerback.

His three full, rather productive seasons in the SEC playing against receivers like Julio Jones, A.J. Green, and Randall Cobb while facing Gamecock teammate Alshon Jeffery in practice made his resume even more impressive.

The Buffalo Bills drafted him No. 10 overall in the draft that year, and after a rocky start to his NFL career, the man-to-man star flashed elite potential.

He played over 1,000 snaps as a rookie, and allowed a reception every 11.8 snaps in coverage, according to Pro Football Focus.

How good is that?

There was plenty of reason to expect a jump into the upper echelon from Gilmore in Year 2.

But a broken wrist on a gang-tackle collision with Aaron Williams in a 2013 preseason game against the Washington Redskins derailed the start of the former first-round pick’s sophomore year as a professional.

He missed the first five games of the regular season and donned a bulky cast when he returned. It disallowed him from employing his ultra-physical style at the line of scrimmage against wide receivers, and the quality of his play suffered.

However, by Week 14, the cast was off, and Gilmore drifted back into his comfort zone. In a loss to the Tampa Bay Buccaneers, PFF gave him a +2.2 coverage grade while mainly covering the monstrous Vincent Jackson. He allowed only one catch for 10 yards and snagged an interception on a jump ball attempt to the 6’5″ receiver.

The following outing against the Jacksonville Jaguars saw Gilmore post a +0.6 coverage grade, and he reeled in another interception.

In Week 16 at home against the Miami Dolphins, he defended two passes en route to a +2.0 coverage grade. Although Gilmore’s coverage grade dipped to -0.3 in the season finale against the New England Patriots, he surrendered only two grabs for 18 yards with a defended pass on targets in his direction.

In Year 3, as a soon-to-be 24-year-old veteran, Gilmore’s ready to emerge as one of the preeminent cornerbacks in football.

Though Jim Schwartz’s defense features plenty of Cover 2 and Cover 3 zone coverage, don’t be surprised if Gilmore is left alone on — yep — an “island” against the opposition’s best receiver every week.

He was never limited athletically whatsoever, but now, with more than 1,700 total defensive snaps of NFL experience spanning over two seasons, I believe Gilmore has learned the nuances of playing the cornerback position as well — footwork, receiver’s route-running tells and tendencies, how grabby he can be downfield, etc.

He’s super talented, is entering the prime of his career and was dominant in the late stages of 2013 when fully healthy.

With games against Brandon Marshall ( and college buddy Alshon Jeffery ), Calvin Johnson, Demaryius Thomas and the Green Bay Packers, he’ll have a handful, but not an abundance, of tough matchups that’ll serve as barometers for his progression.

At some point in 2014, I think we’ll hear Stephon Gilmore’s name in the same breath as Sherman, Revis, Peterson and Haden.