For what it’s worth, word is out that the Bills are interested in moving up in the NFL Draft. Mike Rodak of ESPN.com used Ourlads’ draft value chart to show that it’s… 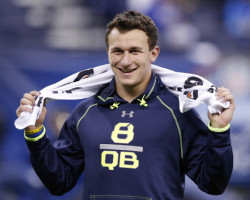 Who Should Bills Draft #1 Overall?

For what it’s worth, word is out that the Bills are interested in moving up in the NFL Draft.

Mike Rodak of ESPN.com used Ourlads’ draft value chart to show that it’s feasible to pull off a deal all the way up to number four without spending any of next year’s draft picks.

Even at a cost of next year’s top pick, it doesn’t take a “once in a lifetime” player to justify trading up. If you’re confident in a guy’s odds of success and you’re not in “we need all the picks we can get” mode, you can afford to be bold.

For a perennial six-game winner, the Bills’ depth chart seems surprisingly impressive. Take a look. They can afford to make the move… but for whom?

Unfortunately, the biggest question mark on the depth chart is at the sport’s most critical position. Nobody saw enough of EJ Manuel in his rookie season to confidently proclaim him the answer. The best (and worst) anyone can reasonably say is “some good, some bad, and he needs to stay healthy.” Do you trade away next year’s first-rounder AND discard last year’s to start the process over? Further muddying the water on the future of the position is not an appealing proposition.

Using a first-round pick on an offensive lineman is like putting a new roof on your house– you know it’s a solid decision but you’ll never enjoy it. It’s not leaking! I’m not wet… just like I wasn’t before! Great. Using TWO first rounders to grab a tackle is like getting the complete tear-off– double the price for something that looks and acts exactly the same. Jake Matthews’ father Bruce played for nineteen years in the NFL– so maybe he’s like the really good shingles. Boring.

Unlike an o-lineman, Sammy Watkins is a lot of fun…

… but with the addition of Mike Williams to a group already featuring Stevie Johnson, Robert Woods, Marquise Goodwin, TJ Graham, Marcus Easley, Chris Hogan and five others, positional meetings are starting to look like an episode of Hoarders.

I don’t have a lot of hard and fast rules when it comes to draft strategy but one that I’d like to see my team adhere to is “If you’re slated to pick ninth, don’t give away next year’s pick to go even higher and then select a tight end.”

There’s a reasonable chance that the best player in the draft is one of Jadeveon Clowney or Khalil Mack. One of them comes with a questionable work ethic. The other has been playing nineteen miles north of Ralph Wilson Stadium for the last four years. I prefer the latter.

Buffalo BillsNFLtrade up in draft