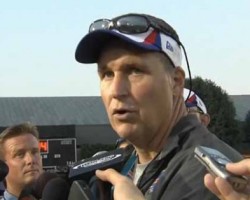 This is the follow-up to an earlier post. If you don’t feel like reading the other one, that’s cool. Here’s the premise.

Back in my radio days, I utilized a device called the Truth Detector to help translate coach-speak into everyday English. The machine is currently boxed up in a storage unit somewhere near Genesee Street in Cheektowaga (though it may be retrieved in time for the regular season). For now, I’ll take what I learned from years of working with the trusty old thing and attempt to channel my inner truth-detector.

Today, we examine Bills coach Doug Marrone’s words (from a Monday news conference) with regard to the injury-ravaged QB corps on his depth chart.

This installment is based on Tuesday’s news conference. 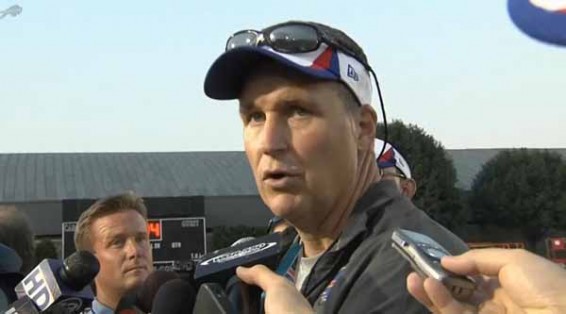 Q: What have you seen from Matt Leinart so far?
A: I’m probably right now more concerned about what we’re going to have the ability to do on Thursday with him in this short time, than I am about exactly what they can overall do. So we’re just trying to make sure the things that they’re comfortable with. They’ve expressed that they’re comfortable with some of the schematics that we run; obviously they’ve done them before, so we just want to pick the right ones that they feel comfortable with and then watch them really play and see how he performs out there.

TRANSLATION: Nothing. He just got here.

Q: Will Jeff Tuel start Thursday or will Matt? Have you decided?

A: Well I’m going to answer this question this way. All of our players are going to be ready to play, but we’re going to be smart about it.

Q: I want to talk about Matt Leinart.

A: Yeah I want to make sure, With Kevin (Kolb’s) situation not being a short term situation, I want to see both of those guys. That’s my goal. Absolutely. I have not made a decision of which one is going to play first.

TRANSLATION: I can tell!

Q: What do you hope to see out of them?

A: Perform. I just want them to perform. Really at the end of the day, I think we’re all going to be looking for the same thing. Who is going to be able to move the offense? Who’s going to perform? We know that we’ve got the effort; we’ve got the time put in by those guys. They’re dedicated; they’re both two very good professionals. Really at the end of the day you’re looking at the performance.

TRANSLATION: I hope they play well because, you know, it’s a pretty important position and the guy we really want to play it can’t do so.

Q: Can you provide an update on what EJ (Manuel) has been doing?
A: Yeah I have no problem. Like I told him, I said I have no problem if he comes out and works out when the media is out here. That’s what he’s doing we don’t need to hide it. He’s coming back and he’s doing everything he can. He’s progressing, I believe it’s seven or eight days after the procedure and he’s 100 miles an hour right now.

TRANSLATION: I want him to play. He wants to play. We hope he can play but we’re not sure if he’ll be able to play.

Q: When EJ comes back, how many full practices are you going to need for him to be able to make a decision about if he can play in the opener?

A: I think I’ll know a lot from that right on the first day he comes back. Meaning that he goes out there that first day and he practices we’ll see how, for lack of a better term, rusty he may be that he may need more. The thing that I look at is when you’re young and energetic you can go back out there and do the same thing. That’s why one of the ways we’re training him right now mentally is getting him as much work as possible. Now he started the physical work, which is good. As soon as he can get out there and get in to start throwing again, that will help in the process. I think to answer your question, the first day he’s out there doing anything, I’ll have a good feel for how long it’ll be.

Q: Has that day been scheduled?
A: It hasn’t been scheduled yet because we’re still pushing. I mean truthfully, we’re still pushing. Like I said before everyone here is a little bit different. Right now, he’s telling me he’s ready to go, but obviously he’s not. That’s the mentality of EJ. I’m excited about it; I’ve watched him do footwork drills and cones. I’ve watched him ride a bike. You talk to the kid and you’d think he’s starting on Thursday.

TRANSLATION: Even I will admit that’s a reasonable question. That doesn’t mean I have an answer or that I’d share it if I did but good effort.

Q: The date or number of days you would need him back doing those things?
A: I think there’s two things that you look at: A.) The number of time he needs to go play and then B.) The number of days for that preparation. I think there’s two things. I think that to give an example, if we were playing New England, obviously we are the first week, and the doctor said ‘you’re not going to get him on that field until Thursday and then he’ll be ready to play on Sunday’, I would be concerned about doing that. If they said ‘we can get him on that field on Monday or Wednesday’, I would see how he played and then make the decision. That’s how I feel about that situation.

TRANSLATION: If you hold off on asking these questions for another week or so, you might be less disappointed with my answers to them.

Q: Do you have a set in stone number of practices that a player has to complete before you consider playing him in a week leading up to a game?

A: I think that depends on the player. I really do. I think I’ve had some veteran players that made this mistake before that have not practiced and we put them in the game and they did not play well. I’ve had some players that obviously that could not practice during a week and go in and play. I think that it really comes down to the player and the responsibility of the coaches, that if we do put him out there than we have to be able to hold him accountable for what we’re asking him to do. Meaning that what you can’t do as a coach is say that if a player gets beat, you can’t sit there and go, ‘Well he was injured, he didn’t practice and that’s going to happen.’ That’s not fair to the club nor is it fair to the team. I think each player is different.