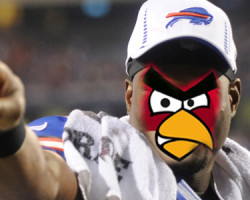 Why So Angry, Byrd?

Bills safety Jairus Byrd addressed the media for the first time since signing his one-year “franchise” deal and, unsurprisingly, he didn’t strike anyone as particularly happy with how things went down.

Q: How are you feeling? What went on and where is your head at?
A: It’s football, now I’m back here. It’s just football.

Q: Do you regret how things happened in anyway?
A: It’s just the business side. It’s what I’ve learned. As far as me, all I knew is you play and you hit free agency, that’s the way it goes. There’s also the business side of things. That’s part of me developing and growing up. Now I understand that part of it. I wouldn’t say it’s anything, it’s just business.

Q: Are you hurt at all by how the Bills handled it?
A: I feel how anyone else would feel if you were in my position, so if that’s hurt? Sure. It’s also business. You can’t really as a human, I mean it’s easy to say don’t take things personal, but it’s hard.

Q: You’ve played hurt and at a high level for four years. Are you frustrated that you couldn’t see eye-to-eye on your value?
A: Sure. It’s like you said, it’s disappointing. I keep going back to it. It’s just business. At the end of the day it is what it is. That’s the business side of things. They see things one way, we see things another way. You’ve got to let your agent handle things like that.

Q: Have you requested a trade?
A: I’m going to leave the private manners of the business side between us. I don’t really want to comment on other things. I’ll let Coach Marrone talk more about the team aspect and what they’re doing upstairs. If you want to talk to Doug (Whaley) or whatever. I’m not in that position to talk about that stuff.

Q: What was your reaction when you learned the Bills were going to use their franchise tag on you?
A: I didn’t really have a reaction; I was a little disappointed honestly. But I was hoping that there would be a resolution to this. That was my, just being honest, that was my initial feeling. I did think that initially it was going to take a while, but there would be a resolution to it. 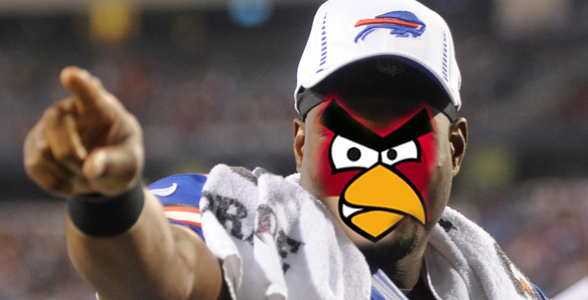 Hitting an NFL player with the franchise tag seems to have roughly the same emotional impact as taking an NHL player to arbitration– which makes sense since:

Many have difficulty comprehending just what’s so bad/offensive about a one year contract paying a player the average salary of the best players at his position. “I’d be happy to play for that,” says nearly everyone not involved in the actual situation. Aside from the obvious (risk of injury during a short contract), there doesn’t seem to be a huge downside.

I have a theory.

Do you have direct deposit? I do. Do you know exactly how much goes into your account every couple of weeks? I don’t. If it were to rise or fall drastically, I’d catch on eventually.

Ever expect a bonus and then not have it show up?