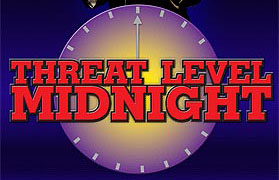 Nearly 48 hours removed from the most memorable news conference in recent Buffalo sports history, it’s time to look back at the key actors involved in the drama and dish out some grades.

Any quotes found below have been pulled from DGWU’s transcription. Special thanks to “The Barrister” for going through the tedious process of converting roughly an hour’s worth of audio into text.

This wasn’t a great day to be seated on the team’s side of the table. Time to face questions not only about another playoff miss (complete with a coach firing and a captain trade) but also about rising ticket prices and the non-presence of owner Terry Pegula. 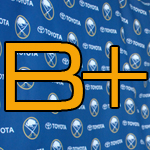 He didn’t get out of it unscathed. The whole “Terry’s available all the time” thing is patently false and there’s really no way to make it true. His late apology for losing his cool initially came off as soft (he didn’t really lose his cool or need to apologize for anything) but, upon further review, looks like a solid PR move. It reset the tension meter to a point where it will take another round of full-on instigation by the media to crank things back to “threat level midnight.” 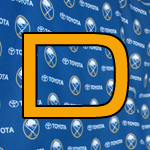 The “where’s Terry?”/”ticket hike” sideshow/fiasco minimized the GM’s role in this whole thing, in large part because the first question the media clamoring for Pegula’s ear would likely ask is “what is THAT GUY still doing here?” The biggest issues facing Regier regard the future of Ron Rolston, Ryan Miller, and Thomas Vanek, and he successfully navigated those waters without tipping his hand, perhaps because the answers don’t yet exist. This makes sense with the players since they’ll likely have some say in whether or not they’ll be on the team next year. Rolston is a different story. If he’s going to be the coach, wouldn’t he have been presented as such? Regier’s “I’ll sit down and discuss things with Ron” stance could’ve been pressed but wasn’t. The guess here is that Rolston winds up with a choice of returning to his spot in Rochester or walking away entirely. 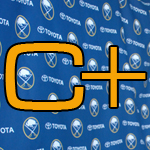 … has no grade point average. An unsurprising “no show”, Pegula was (and is) wise to steer clear of what is akin to a shooting gallery. He wants to win the Cup, plans to win the Cup, and hasn’t won the Cup… in 1 full and 2 partial seasons. His non-availability has become a story although it’s unclear what answers are required of him beyond the aforementioned “So… keeping Darcy, huh?” Lack of attendance earns him a B+ for “self and situational awareness” but the grade is pulled down by skipping the opportunity to expose the “Terry’s hiding from me because I ask tough questions” contingent. Call their bluff. 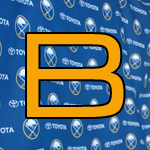 Sully was Sully. He’s never been opposed to confrontation (notable exchanges with Bruce Smith and Ryan Miller come to mind), doesn’t pretend to care what anyone thinks about his opinions, and wasn’t afraid to state that Ted Black’s Monday comments would have very little impact on the tone of his Tuesday column.

Q: Ted, I don’t know what percentage of the fan base is unhappy and disaffected and how many have considered actually giving up their tickets, but I want to know how concerned you are about losing some of those people because your actions suggest that you feel that you have a captive audience that won’t leave and that you’re taking them for granted.

A: That’s, uh, is that your opinion the last part of that, or…

Q: Yeah that’s my opinion I’m gonna write it tomorrow, you can respond to it ahead of time.

A: You don’t have to get hostile, Jerry. I’m just trying to figure out what’s opinion and what’s reporting…

Q: There’s perceptions out there. I’m asking you if you’re concerned. There’s a question mark there.

Q: I think, I think you act as if you have a captive audience and you’re taking them for granted. If I’m the only person that thinks that, fine. Answer the question.

With 23 years at TBN and another 20 on WGR, we should all have a pretty good idea of what we’re going to get out of Sully. In fact, it’d be disappointing if he didn’t show up “in character.” He stepped to plate and hit a stand-up double. Jerry Sullivan– professional hitter. He’s a tough marshmallow. 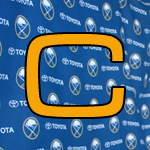 We’re not sure if Scott was literally wearing his “red coat” but it certainly made a metaphorical appearance.

For Ted, why isn’t Mr. Pegula here today? You’re raising ticket prices, team has missed the playoffs. Doesn’t he have an obligation answer questions about both the hockey side and the business side of the operation?

Anyone could’ve asked that. It’s the follow-up that could only come from someone convinced that he’s “On Your Side.”

Well, can I say for Buffalo fans they expect their owners to be responsible and responsive to what’s going on, and that means answering questions.

It’s unclear whether Brown really believes he’s doing a public service but he definitely acts like it. Like Sullivan, Brown knows his role.

Mike’s trying to find his role. After years of toiling anonymously on the Bisons beat, he’s clearly interested in establishing himself as a “personality” like the big kids at The Buffalo News– Sullivan, Tim Graham, and Bucky Gleason. More than anyone else at TBN, he’s caught up in the world of social media… reaching out for support (and gratuitously sharing it) while shouting down legitimate criticism from his rickety, self-constructed pulpit.

@passionbucket16 nah. They’re just fired ex-media people or those who work for free publications so their gig is to bash real media.

(If Harrington’s grasp of what we do at Trending Buffalo is in any way indicative of his grasp of the teams he covers and/or the media landscape in Buffalo, well, that explains a lot.)

And there’s this exchange, in which “Real Media Mike” proudly displays his fundamental lack of understanding of the United States Postal System… and consistently interrupts the guy attempting to explain it to him:

Mike Harrington: Ted there’s a couple of points on this ticket thing that we gotta delve into more. First of all: why would you announce any price hike and get the letters to fans on Fan Appreciation Night? Do you have any sense of how callous and insensitive your fan base thinks that was?

Ted Black: Thanks for the question, Mike, I really appreciate that. The fact of the matter is as soon as we made the decision we sent it out. It could have arrived on somebody’s birthday and they would have said how callous it is that I get it on my birthday

TB: Let me finish…
I think it would be disingenuous to wait until Memorial Day weekend to send it or anything else. As soon as we made the decision, we sent it out. As I said, other teams will, I’m sure, raise prices and they haven’t sent theirs out yet.  Also, they’ll have an earlier time to decide whether they want to buy or they don’t want to buy. Not every season ticket holder is an individual. There are businesses that are season ticket holders, they may be on a fiscal year, their fiscal year ends June 30, they’re able to make a decision and play their budget accordingly. We’re going through a budget process here, I’m sure they do it at the paper in or around this time to decide how they’re going to allocate money. So the earlier you get the information in the fans’ hands, the better. And historically, we’ve sent out the same letter and/or invoice about this time every year.

MH: And historically you’ve never sent it out on fan appreciation night so we’ve made that clear so let’s go to the other point…

TB: No, we didn’t send it out on fan appreciation night. The wonderful speed with which the post office delivered it, was that it arrived that day. So we sent it out before. There was no timing. If the suggestion, Mike, in any way shape or form is that we did this to be callous…

Why does the letter F even exist if it’s not going to be applied as a grade on Harrington’s performance? Well, we’d like to believe that Mike’s heart is in the right place. He’s just trying to find his way.

Rest of media in attendance 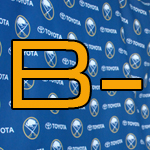 Congratulations. You successfully executed your job without any blatant attempt at making yourself the story. Paul Hamilton, John Wawrow, and others acted like hockey reporters covering a hockey team. That said, nobody in the room had a follow-up to this Regier statement regarding interim head coach Ron Rolston?

Darcy: Um, Ron’s situation will be that he and I will sit down over the next week, maybe couple of weeks, re-evaluate the season, and have discussions about our relationship going forward. But I would add that I think he did a very good job under trying circumstances. And, uh, but again we’ll address that down the road. 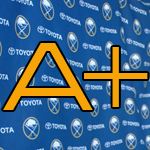 It took almost as long to read this FJM-style monster as it did to listen to press conference itself, so we can’t imagine how long it took to write. While we don’t agree with every sentiment expressed within (i.e. Sullivan is not a hack, Hamilton is not a walrus), the sentiment is legit– WTF is going on here? Does anybody know anything? Plus, lots of profanity… and we love profanity.

Take in information. Process it. Put it back out from a rational, intelligent, and unique perspective. We like Ryan.

A late addition from Joe Pinzone, as we didn’t read this until after we had initially published the piece you’re reading now. 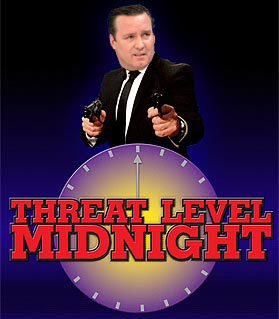 We give new media, including ourselves, an A+.