John Scott is on the team, right?

NHL Coaches Stand Behind Rolston In Face Of Fine

If you were surprised to hear of the NHL-issued fine imposed upon Sabres head coach Ron Rolston for “player selection” in the wake of Sunday’s Sabres/Leafs brawl, you were not alone. 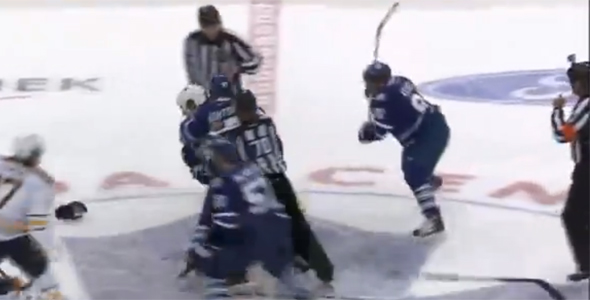 Note: The referee’s hand in the air indicates that a penalty is going to be called.

According to Chris Stevenson’s piece for The Toronto Sun, some coaches around the league are questioning the NHL’s latest bizarre implementation of discipline– anonymously, of course.

One coach who spoke to QMI Agency Wednesday afternoon was in the process of contacting his colleagues to form a united front to question the league on the decision to fine Rolston.

Makes sense. How on Earth can the league say it was an inappropriate time for John Scott to be on the ice? He’s on the team, right? If that’s OK (and it is), why can’t he play whenever the coach sees fit?

One coach contacted by QMI was fuming with the decision to fine Rolston.

“So what am I supposed to do now?” he mused. “Do I call the ref over and call timeout so I can call (league vice-president of hockey operations) Colie Campbell and ask him who I can put on the ice?”

He said he was upset enough over the fine that he was thinking about refusing to do in-game interviews as a protest.

“What (Rolston) did was pretty much what a lot of us would have done in those circumstances,” said another coach. “Now the league is going to tell who we can and who can’t put on the ice? I have no problem with discipline for our actions, but dictating ‘player selection’ crosses a line in my mind.”

Another coach believes this is the sort of thing that can muck up an entire organization.