Whatever, talk about sports.

Maybe we’re all the dumbest things in Buffalo.

5. Arby’s Swapped Out For Tim Hortons On Delaware Avenue in Allentown

WHAT IN SAM HELL? I don’t see no seasoned fries on the Tim Hortons menu. I don’t see no roast beef filled donuts. Sounds like Buffalo lost this one. Thanks Obama.

Jim Heaney over at the Investigative Post crunches some stats on how awful of a citizen you are.

To sum up: you suck. 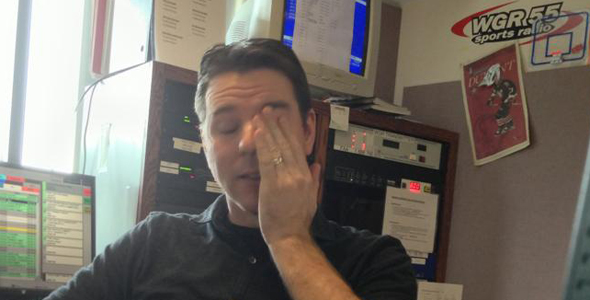 It only took 15 years of feeling like this for Greg to say goodbye.

He worked there for 15 years. That’s a lot of losing. Our teams are generally terrible, but out of those moments come opportunities for terrific comedy, and Bauch excelled at this. Gallows humor and what not.

And now that he is moving on to become a private investigator to the Hollywood stars (I think, I’m not sure) let us reflect on his time here and say that he was hilarious.

Whatever, talk about sports.

2. Chaos At The Rink

What happened in Toronto last weekend like for real?

John Scott tried to punch a guy who usually does not punch guys because another guy got punched earlier when he tried to punch another guy and he got hurt in that punch-up so somebody was going to get punched for that but you are only allowed to punch certain guys at certain times unlike in the real world where if you punch anybody at anytime the cops come and talk to you oh my God hockey is a stupid sport.

1. All Of Our Churches Are Gorgeous And That’s The Problem

If our churches were terrible to look at we wouldn’t have a problem putting cannonballs through them. The problem is that a lot of these old churches are magnificent buildings to look at and be in. They were all the center of these tiny, dense neighborhoods in the Buffalo of old, and now that the city has turned over and hollowed out there is nothing to do with them.

I don’t know how to fix the problem. These aren’t old warehouses or abandoned homes on the East Side. These are places of worship where communities were held together. Many of them still have former parishioners fighting for them.

Ending up here like this with all these old places of the heart on the chopping block– dumb.